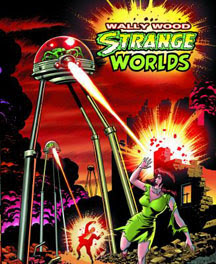 To celebrate today's 700th post at HOORAY FOR WALLY WOOD, we're "simulcasting" my review of Vanguard Publishing's new collection of Woody's early sci-fi comics. Thanks to J. David Spurlock, the Keeper of the Wood Flame, for a review copy!


From out of deepest space and via time warp from the far-flung fifties comes STRANGE WORLDS, the ultimate collection of Wallace Wood’s early, non-EC science fiction and fantasy stories.
This is not a book to introduce one’s self to Wood, arguably the greatest sci-fi illustrator of the 20th Century. No, STRANGE WORLDS is a book for Wood fans who want the big picture. What we have here is the chance to watch the artist’s astonishingly rapid development from almost crude beginnings to his fabled mastery of storytelling, composition and shadows, all in just the few short years featured herein. Between black and white reprints and online scans, the true connoisseur has seen most of this work before but oh, to have it now in such a nice chronological presentation with lovingly restored color from the original issues of SPACE DETECTIVE, CAPTAIN SCIENCE, AMAZING ADVENTURES and other long-forgotten four-color treasures! Words fail.
To be honest, the stories themselves aren’t much, many being clichéd space opera of the most antiquated sort. But this isn’t a book about stories. It’s a book about art. Wood’s early collaborations with Joe Orlando are present as well as work done with Al Williamson, Frank Frazetta and even Jack Kirby. And every one is a revelation to Wood fans, showing off his enthusiasm for outer space stories and his experimentations as he became the genius he would so quickly become. 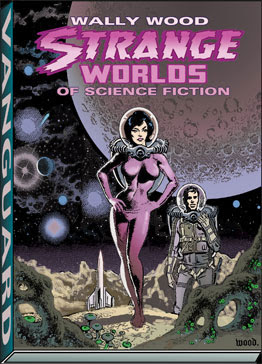 So exactly what is in STRANGE WORLDS? To start with, there’s THE FLYING SAUCERS, a fairly serious full-length tale exploiting UFO’s when they were in the news almost daily. Then there’s AN EARTHMAN ON VENUS, inexplicably appearing in black and white. There are a number of series entries with characters including  the aforementioned Captain Science and Space Detective as well as Kenton of the Star Patrol and Rocky X of the Rocketeers. Dotted around these are one-off stories from various publishers with the book finishing up with a post-EC tale from Atlas and some beautifully colored continuity from the SKY MASTERS OF THE SPACE FORCE  newspaper strip in which Wood inked Jack Kirby in what many have called the best work of either artist! In between many of the stories are original art panels and pages from some of the artist’s best-known EC classics which can be used to compare his development.
All of this is wrapped up in David Spurlock’s beautiful packaging. The front cover of the regular edition is a “new” piece of Wally Wood art produced by the great designer and artist, Jim Steranko, utilizing bits and pieces from various Wood illustrations. In this manner, Jim has created Woodwork that highlights Wood’s trademark spaceman, a sexy woman and a sleek rocket all amidst a screen-laden planetscape.
In case anyone hasn’t been paying attention, let me say it plainly—This is a gorgeous volume!
The limited slipcase edition flops the new cover to the back and spotlights on its front the amazing Wood/Adkins cover for a 1964 record album of H.G. Wells’ WAR OF THE WORLDS. It also offers an additional portfolio of the little-seen inside front cover art that Wood did for many of the Avon titles on which he worked in the 1950’s.
Wallace Wood took his own life in 1981, more than 30 years ago now. And yet 2012 looks to be Wood’s best year ever with forthcoming Wood projects from Fantagraphics and IDW (and a couple more rumored but as yet officially unannounced!). It all starts, just like Woody did, with Vanguard’s STRANGE WORLDS. You should start there, too!


The hardcover and the limited edition are out now and the softcover is coming soon. You can order your copy today at:  http://www.vanguardproductions.net/Wood3/index
Posted by Booksteve at 4:30 PM