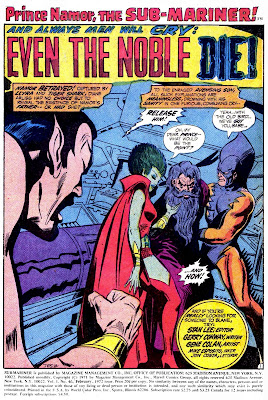 Okay, Adam Austin and Joe Gaudioso are back again, under their real names as Gene Colan and Mike Esposito. Hardly the best work of either man, however.

I like Llyra. She really looks evil to me here and not as cartoony evil as usual. Tiger Shark is well drawn, also. You certainly don't see too much of our hero, though and what you do see is drawn from an odd angle.

What really gets me here, however, is the sparse background inking. I understand that if it were overly detailed it could conceivably distract from the main image. That does not, however, mean that it had to be left as sketchy as it has.

And still with the bright yellow. At least not too much of it this time.

Note, by the way, that this feature is now coming on Saturday rather than Sunday and that we've lost some alliteration. There's no definite pint where one can say the Silver Age has ended and the Bronze Age begun but 1972 seems pretty reasonable to me to be considered early Bronze.
Posted by Booksteve at 5:23 PM