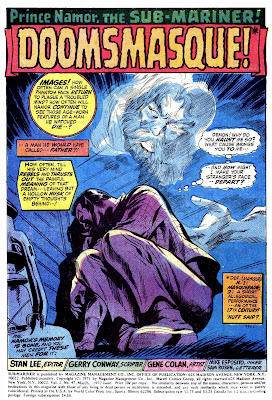 Another nice one. Someone has finally discovered a more muted yellow! At last! Huzzah!

This Gene Colan splash is strongly--but probably coincidentally--reminiscent of the artist's work on this series back when it was still in TALES TO ASTONISH. Back then, there was a multi-part story where Namor was on the run and in disguise. Here he has amnesia and is disguised as a regular human.

That's his father's image appearing above him. The storyline beginning here is a redo of the old Subby teams up with Doctor Doom to take on the world theme first seen in FF # 6. I don't know why that supposedly seemed such a natural team-up but, as Namor's title ended in a couple more years, Marvel would revisit it yet again...monthly in fact...in SUPER-VILLAIN TEAM-UP! As if Subby was a villain! What the heck was up with that?
Posted by Booksteve at 12:41 AM