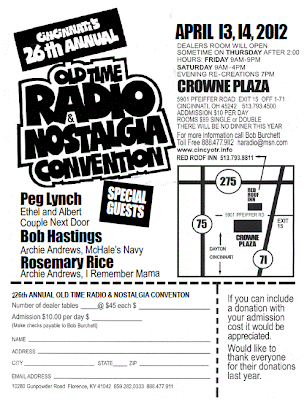 I'm sorry to say this will be the last Cincinnati convention. It
was not an easy decision to make.

I think the future of conventions is the kind that Martin Grams
puts on. The days of the radio conventions have passed. You can
tell by the attendance over the last few years. We had good
attendance over the years when we were able to bring in guests
that everyone knew. Many of them are no longer with us. I used
to meet the guests at Newark, and then invite them to
Cincinnati. That's no longer possible with Newark holding its
last convention this year.

With the economy the way it is, many don't want to spend (or
have it to spend) the money to come to conventions, and there
aren't enough young fans to make up for the older fans we have
lost. (I might add I'm not getting any younger either.)

It's been a great run over the years. We have met a lot of
really nice people and many of the old radio stars we listened
to growing up.

Let's make this last one, one to remember.

If you have been putting off coming to Cincinnati, make your
plans now to attend. April 13,14, 2012. 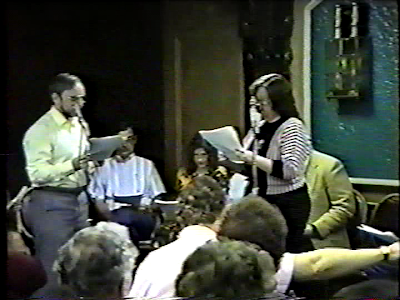 Seen above are myself and my then-girlfriend Rene performing at the 5th Annual convention back in 1990. This convention has long since become a major part of our lives and its regular attendees are like family. Very sad to be present for its inevitable end.
Posted by Booksteve at 10:40 AM