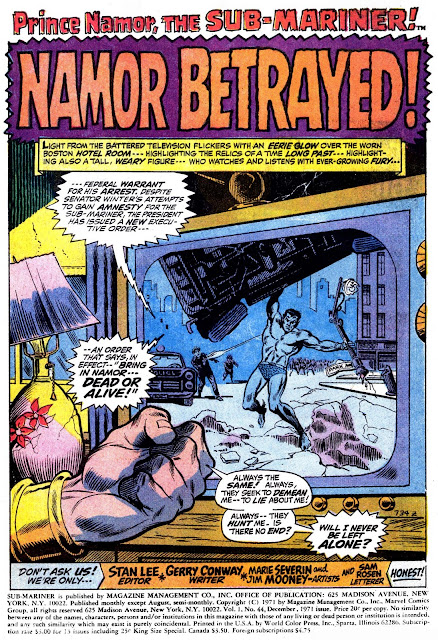 We're back! Not a bad splash this week, either. Kind of creative. Not great but...not bad at all. The in-panel TV screen literally frames the full body image. Interesting that by 1971, it would be a black and white television. By that point, nearly everyone I knew had color TV. Even we had had three whole years! The art is jointly credited for this issue to Marie Severin and Jim Mooney but only a couple of panels really show much of Marie. I'd swear this was pure Mooney...and GOOD Mooney, too! Conway still doesn't quite seem to have the characterizations down (to my mind), including that of the guesting Human Torch. That said, though, here we have the beginnings of a storyline that will both tie up the ongoing Llyra plot as well as set up an addendum to Subby's origin story!
Posted by Booksteve at 12:34 AM