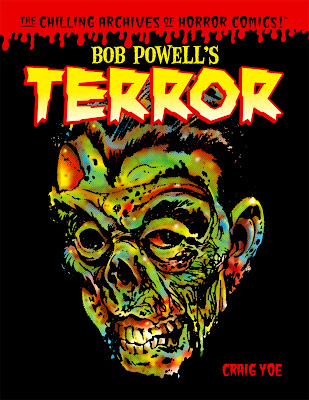 BOB POWELL'S TERROR is the latest offering from Yoe Books and it celebrates the long unsung artist whose fifties horror work could easily stand with the best of the EC crew.

I first discovered Powell with what, ironically, turned out to be some of his final work--the Human Torch and Thing series in STRANGE TALES in the mid-sixties. Even then it was before my time and I discovered it piecemeal through back issues. Then I saw Harvey's reprints of Powell's MAN IN BLACK...CALLED FATE stories. Years later I learned of Powell's involvement with those nasty li'l MARS ATTACKS cards we kids used to share behind the garage when no one was looking.

Other than that, I never gave the man much thought over the next few decades. As I delved more and more into comics history, however, I became acutely aware that Bob Powell was omnipresent! He did cowboys, superheroes, spacemen and some of the creepiest monsters you ever saw in a comic!

ALTER EGO did a lovely tribute issue to Bob Powell a few years back and it whetted my appetite for some complete stories. Now comes Craig Yoe with Volume 2 of his Chilling Archives of Horror Comics, BOB POWELL'S TERROR!

Similar in format to other Yoe Books, BOB POWELL'S TERROR presents a 22 page, highly illustrated and annotated essay/bio on the artist followed by no less than sixteen genuinely creepy pre-code horror tales from Fawcett, Harvey and other companies---two reprinted in high definition from the gorgeous original artwork!

Here's an excerpt from IDW's press release: IDW Publishing and its imprint, Yoe! Books are proud to announce the launch of BOB POWELL'S TERROR, a frighteningly beautiful hardcover collection of this master 1950s cartoonist’s work. Available in comic and book stores today, BOB POWELL'S TERROR offers 148 pages of the best of this cult favorite, including his 1950s most terrifying horror comics, as chosen by his most ravenous fans.

Bob Powell was a master 1950s horror cartoonist delineating some of the most imaginative and incredibly drawn comics in the horror comic book genre. From terrifying ghouls to tantalizing girls, BOB POWELL'S TERRORcollects the best of Powell’s creations.


“Bob Powell rocked horror comics!” enthused Craig Yoe, who designed and edited the book. “The mood, the monsters, the maidens – and the innovative noir-ish stylings – make some coolest horror comics in the history of the medium. And speaking of horror, Bob Powell’s comics go beyond the silliness of many vintage comics of that genre and are actually often terrifying! I don’t recommend night time reading!”
This must-have hardcover begins with an introduction by Eisner winner Yoe, and is full of extensive and revealing quotes from a recently discovered manuscript about his work, penned by Powell himself. The book’s front matter is profusely illustrated with rare ephemera and flawless reproductions of Powell’s original art including unpublished treats. All of the stories in BOB POWELL'S TERROR are carefully scanned and reproduced from vintage comics, many of them quite rare.

Thanks to Yoe Books and IDW, we here at BOOKSTEVE'S LIBRARY have a copy of BOB POWELL'S TERROR to be given away FREE  just in time for the holidays!

No fuss, no muss. Just send me an email at booksteve@aol.com indicating which unsung artists you'd like to see covered in future volumes of Yoe Books Chilling Adventures of Horror Comics. One winner will be chosen at random this weekend. He or she will be contacted via email for their address and the book will be mailed out on Monday.

UPDATE: Only received two entries on Friday after yesterday's big rush of same. Contest will end at Midnight ET on Saturday so you still have time to enter. Current plans call for all the winner to be chosen by our totally unbiased kittens. All the names will be placed on a board and the first one the playful l'il kitties knock down wins! REMINDER: You win the copy of BOB POWELL'S TERROR. I make no guarantees that your suggestion will actually get the Yoe Books treatment, just that I will pass them along to Craig for consideration!


UPDATE: We have a winner and that person IS...........wanting to remain anonymous. That said, they have been notified and, in fact, their prize went out in the mail today after a half hour wait in line at the Post Office. Thanks to all who entered and we will be having another giveaway coming up very shortly! Stay tuned!!
Posted by Booksteve at 9:27 AM