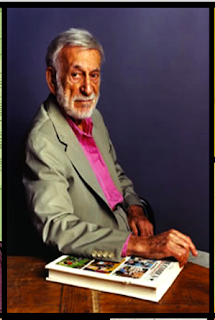 I first heard his name as a cartoonist in the 1966 PARADE OF COMICS coloring book. Then I read in Steranko's HISTORY OF COMICS of just some of Jerry's importance in the field. It was then I discovered Robinson's own massive history of newspaper strips entitled THE COMICS (the edition under his arm in the picture)which introduced me to so many strips and cartoonists I had never been aware of before at all!

Not content to rest on his laurels, the man who claimed credit for creating Robin and the Joker and whose work influenced Kubert, Ditko and scores of others who followed, was also a major player in the fight to get justice for Siegel and Shuster! For a while he was even signed as a special consultant to DC.

In recent years, he seemed to enjoy playing the role of the elder statesman of comics at conventions and on Facebook (where I was able to "speak" with him once, briefly, and thank him for all his work) but even then continued his work as a historian, publishing or contributing to a number of projects including a recent autobiography!

Rest in Peace, sir.
Posted by Booksteve at 1:01 PM