Movies That Fell Through the Cracks # 71 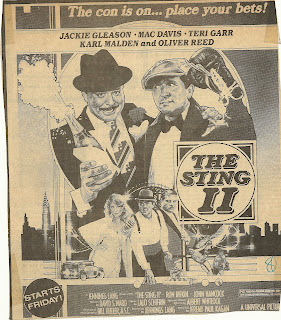 1973's THE STING is one of my all-time favorite films--it's a good drama with lots of comedic moments, a great musical score, winning performances from 2 of the biggest stars in the world at the time, award-winning direction and a memorable ending!

Made a decade later, the filmmakers swore these were different characters (different first names, see?) and thus rationalized the recasting of handsome, blue-eyed Paul Newman with overweight TV comic and character actor Jackie Gleason! Sexy, blond Robert Redford was similarly replaced by curly-haired country singer Mac Davis. But remember! These were NOT really the same characters!

Even though Oliver Reed replaced Robert Shaw (they HAD to replace him. He died several years earlier) as the villain who was now attempting to get back the money he was conned out of by our heroes in what sounds like the plot from the other film...these still weren't the same characters!

One of the all-time great TV icons, Gleason had actually seen his big-screen career thrive in the seventies and eighties starting with SMOKEY & THE BANDIT in 1976 and continuing through a number of well-acted vehicles.

There was also Terri Garr whose star had risen pretty high in the past decade, along with veteran Karl Malden. The plot wasn't bad, the script by the writer of the original. The wonderful ragtime score of the original was replaced here by an all-new but completely unmemorable score by one of my favorite film music composers, Lalo Schifrin.

The whole thing was produced by Jennings Lang, a man known for a number of disaster movies--in various senses of that word.

If you haven't seen THE STING, you might enjoy THE STING II. If you enjoyed THE STING, however, I don't recommend the second one.
Posted by Booksteve at 7:49 PM