Review: Party Animals For Hire (Part 1-The Net is cast) 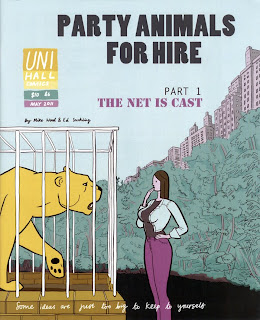 This is a tough one to review. On the surface, it's drawn in a style I don't particularly care for and the lettering is done in a style that makes it nearly impossible for me to read without struggling through every line. Only thing is, by the end of it, I was sorry it was over.

Creators Mike Wood and Ed Suckling have crafted a somewhat eccentric, low-key graphic novel with genuinely relatable characters--a tough act to pull off I'd say, based on how many big name graphic novels feature characters I never care about at all. Mr. Wood's script is, when one is able to decipher it, almost unexpectedly clever.

The plot deals with a zoo, some stuntmen, dead horses, courtrooms, a prison, big money and big ideas, almost none of which end up where you might expect them to end up. The more or less point of view character is the woman on the cover, an overly buxom (but not exploited in the typical comic book manner of recent decades) defense attorney.

At first glance, Mr. Suckling's art is simplistic to the point of being amateurish but as the pages turn, one notices that he actually has a pretty tight grip on shots, "camera" angles and the nuances of the storytelling. I got used to the style and began to actually appreciate the effects he threw in to distract from what could have been panel after panel of talking heads.

Don't get me started on the lettering. Seriously, I am not exaggerating when I say the semi-cursive, scrunched up text was nearly indecipherable at times. Although not a long book, I had to read it in shifts just to rest my eyes.

While that might have been a deal killer in some other instance, here decoding the dialogue was worth the effort. I enjoyed this first volume of PARTY ANIMALS FOR HIRE and hope to see more soon (with hopefully a different style of lettering--hint, hint). It's not going to find mainstream success but if you like something a little different all around, I think you'll find this fits the bill...and it's actually GOOD!

http://www.strandbooks.com/product/party%2Danimals%2Dfor%2Dhire/_/searchString/party%20animals%20for%20hire
Posted by Booksteve at 10:07 AM