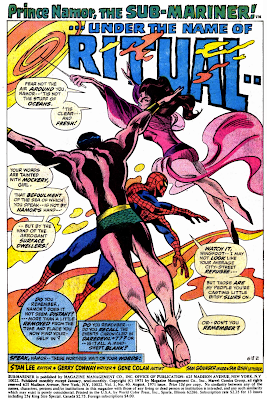 It's the summer of 1971 and changes are happening almost daily at Marvel Comics although they continued to try to show themselves to fans as one big happy bullpen.

As far as we're concerned, the biggest change was a whole new creative team for Prince Namor.

Hot young writer Gerry Conway takes over as writer and veteran Subby artist Gene (Adam Austin) Colan takes over on pencils. The pair comes directly from DAREDEVIL where Sub-Mariner and Spider-Man guest-starred in the most recent issue so that story continues here.

Unfortunately, inker Tom Palmer, by far the best inker for the highly stylized Colan, wasn't included in that deal. Instead we get Sam Grainger, an artist whose work I really like but whose solid, Trimpe or early Barry Smith style is horribly out of place here.

I like the title and the placement thereof but I don't care at all for the layout of this splash or really the art itself. Next!
Posted by Booksteve at 12:08 AM