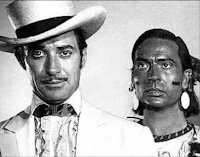 As we said yesterday: With the holidays upon us, may we make some gift  suggestions for the pop culture connoisseur from our shared DVD site? We have stuff I can guarantee you won't find, at least in quality as good, anywhere else! All this week, we'll be sharing some highlights here for your consideration. Today, more rare television! Remember, unless otherwise marked, all single DVD's are only $7.00 each, with $6.00 postage no matter how many you order! http://oldtimeradiotapes.homestead.com/StevenSiteHome.html
YANCY DERRINGER: The Complete TV Series
Stars Jock Mahoney as Yancy in this short-lived but well-appreciated television series that western fanatics rave about. Can’t get enough? Try watching all 34 episodes in chronological order and you’ll still be begging for more. Complete series now available on this six-disc box set.  $40.00
WAR OF THE WORLDS: THE UNAIRED TV PILOT
George Pal is probably best remembered for producing the War of the Worlds movie that won an Academy Award for best special effects in 1952.  What many people do not know was that in 1968, Pal put together a short film as a pilot for a proposed TV series based on the same novel his 1952 movie was adapted from.  It never aired on TV.  This DVD includes the promo footage explaining the crew of the star shiop Pegusus, their special abilities, and the opening shots of the first day's filming.  Also included on this DVD is 30 minuites of raw footage of the technicians attempting various shots of special effects featured in Pal's science-fiction movies, a movie trailer, and a movie!
WHISPERING SMITH: THE COMPLETE SERIES
That's right! All 25 episodes of the television western starring Audie Murphy is now available on DVD! Considered for years as the holy grail of television westerns, up until now only one episode was ever available on DVD. But we now have the entire series and direct from original masters!  $25.00
SUPERBOY / SUPERPUP PILOTS
This collection of rare footage originates from the original masters! The untimely death of George Reeves caused the producers to create pilots for spin-off series that sadly, never went any further than the footage contained in this DVD.
SUPERBOY (1961) "The Rajah's Ransom" a teenage rendition of the classic Superman TV show.
SUPERBOY SCREEN TESTS (1960-1961) Women compete for the Lana Lang role!
THE ADVENTURES OF SUPERPUP (1958) midgets in dog costumes play the roles!
SUPERMAN COMMERCIALS (1954-1957) Not one or two, but 12 Kellogg's commercials with George Reeves as Clark Kent selling cereal!
STAMP DAY FOR SUPERMAN (1952) rare promo film with the TV cast selling Government Savings and Stamps.
Plus a 1942 Superman animated cartoon spoof of Superman!
THEN CAME BRONSON: THE COMPLETE SERIES
All 26 episodes of the classic short-run series, starring Michael Parks as the newspaperman who becomes disillusioned after the suicide of his best friend. He gets a motorcycle and then wanders the country helping out others who need psychological and physical help. A critical success and one episode even won a writers' guild award. The made-for-TV pilot is also included in this multi-disc box set, which includes guest appearances by Jack Klugman, Kurt Russell, James Whitmore, Elsa Lanchester, Diane Ladd, Robert Loggia, Dabney Coleman, Beverly Garland, Iron Eyes Cody, Veronica Cartwright and many more!  $45.00
OUT OF THIS WORLD
Telecast on British Television on July 7, 1952, with horror host Boris Karloff, this short-run and extremely rare television series features an adaptation of Isaac Asimov’s short story, “The Little Lost Robot.” Supposedly only two episodes of this radio series is known to exist, but to date, only one is circulating. As an added bonus, this DVD features two other rare television episodes of other shows with Boris Karloff as guest.
THE MUNSTERS: UNAIRED PILOTS
Here's a DVD worth viewing. The original surviving color footage of the original unaired TV pilot, followed by the black and white unaired TV pilot with a slightly different cast and makeup, followed by the actual pilot that did sell the series! That's right, three pilots! As a bonus you also get movie trailers for MUNSTERS movies, Cheerio commercial with the MUNSTER cast, and even THE MUNSTERS AT MARINE LAND footage!
McHALE’S NAVY: The Pilot
Before the comedy TV series, there was this hour-long pilot broadcast on April 3, 1962, ALOCA PREMIERE, hosted by Fred Astaire. Played straight-forward as a serious drama, with Ernest Borgnine in the lead, this served as the pilot that sold the network on a weekly half-hour series in a comedy format.
NBC FOLLIES
All-star special broadcast in the fall of 1973 with such luminaries as Sammy Davis Jr., Andy Griffith, John Davidson, Mickey Rooney and Connie Stevens. Vaudeville and variety entertainment on this rarely-seen TV special!
Posted by Booksteve at 12:56 PM