Cyber Monday Recommendations--Books and Things I Worked On 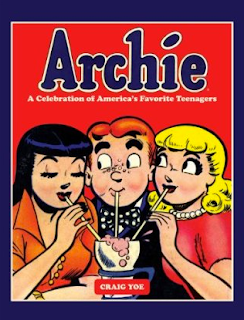 In lieu of a regular job this past year, I have been keeping busy by doing work behind the scenes on various books, most of which would make wonderful holiday gifts for the discerning comics or pop culture fan! Let's go over the list!

I've written here before that most of my work was for Yoe Books so let's go there first, shall we?  Just remember...that man with the white beard isn't Santa. He's a former muppet.

My favorite would have to be ARCHIE: A CELEBRATION OF AMERICA'S FAVORITE TEENAGERS. This 70th anniversary history/tribute of is the one I worked on most, doing interviews, providing art, proofreading, transcription and even ghostwriting first drafts of many chapters in the book. Visually, Craig has designed an absolutely stunning look back at the company's output covering not just the comics but radio, cartoons, music, television and merchandising! The book has been criticized by some as whitewashing the history part but look at the title. This was meant to be a "celebration!" And a joyous one it is! If you've ever enjoyed Archie in any decade, you'll love meeting your old friends all over again in this lovely volume!

THE BEST OF ARCHIE'S MADHOUSE was the nifty follow-up to the above, reprinting scores of silly and fun pieces from Archie Comics' own in-house version of MAD that ran through the 1960's. I wrote a second draft of the introduction to this one as well as did research, proofreading and fact-checking. In the process, I got to do a second interview with writer George Gladir, a dear man who was long associated with the title and who co-created SABRINA, THE TEENAGE WITCH with artist Dan DeCarlo! Sabrina's early stories appeared in ARCHIE'S MADHOUSE and her debut is reprinted here along with a rare Wally Wood story--his only one for the company.

AMAZING 3-D COMICS, as I mentioned in my review, was fun for me in spite of the fact that I can't see 3-D! Never could! that right there should say something. As always from Yoe, it's a beautifully designed volume with a multi-layered lenticular cover by Joe Kubert done exclusively for this book! The history of 3-D is presented in--pardon the pun--great depth and then a wide selection of reprints from the various publishers who jumped on that bandwagon during the fifties boom fills out the book...in 3-D...with glasses! For this book, I provided some illustrations, proofread, transcribed interviews and was greatly pleased at being able to speak at some length with Joan Howard Maurer whose husband Norman was one of the co-craetors of comic book 3-D. Ms. Maurer herself is the delightful daughter of Stooge Moe Howard, a  lifelong favorite of mine. 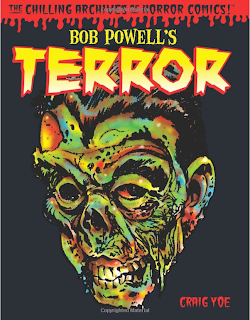 BOB POWELL'S TERROR is the newest book from Yoe Books. I did research, fact-checking and proofreading for this one. I'm working on a bigger piece on it but for now let's just say if you're a fan of pre-Code horror comics, this collection offers some of the best outside of EC. Mostly unsung artist Bob Powell worked on all genres from the forties to the sixties and was always creative but horror was probably his best. Craig has chosen many grisly but stylish examples, some from the original art!

THE CARL BARKS BIG BOOK OF BARNEY BEAR surprised me as the stories, while not on par with the artist's Disney Duck stories, were much more fun than the MGM cartoon source material would lead one to expect! On this one I did proofreading only but my wife came up with the final version of the title after several early ones were rejected.

POPEYE: THE GREAT COMIC BOOK TALES BY BUD SAGENDORF offers just that--a whole big bunch of fun tales of the legendary one-eyed sailor man by the artist most associated with him other than creator Elzie Segar. As usual, there's a wonderfully detailed background history up front. I proofread this one, too.


Not out but due before Christmas from Cider Mill Press is Craig's OFFICIAL BARF BOOK, the follow-up to his shockingly successful OFFICIAL FART BOOK from last year! I did quite a bit of writing (yuck!) for this one and my wife and I both did extensive (and somewhat disgusting!) research for it.

And for the younger folks on your holiday lists, don't forget Craig's GREAT TREASURY OF CHRISTMAS COMIC BOOK STORIES from last year! I didn't work on it one bit but it's a wonderful nostalgic treat for adults that should be shared with children of all ages! 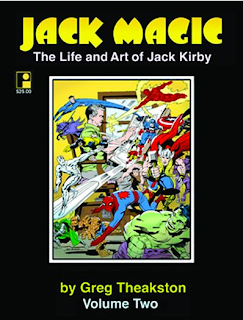 One more from Craig, this one published by Abrams, is KRAZY KAT AND THE ART OF GEORGE HERRIMAN. While I did some research for this one early on, it ended up not being used so technically I didn't work on it. Honestly, I've never even been a fan of KRAZY KAT. That said, this may well be Craig Yoe's best book to date and my favorite of his works! It's a big, beautiful, passionate love letter to one of his personal favorites. I'm overdue on a full review so watch for it!

Okay, moving on from Yoe. I was pleased to do proofreading and fact-checking on Greg Theakston's somewhat eccentric and controversial two-volume biography of Jack Kirby, JACK MAGIC. Greg even lists me as co-editor on Volume 2. The author has spent much of his career as a publisher chronicling the King's life and works and these volumes, based in part on his own many interactions with and observations of the man over several decades, gave me a whole new perspective on Kirby's place in comics history...and Stan Lee's also! Volume One seems to be already hard to find but you can order Volume Two here. 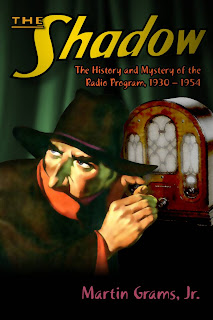 Author Martin Grams is the prolific purveyor of pop culture histories of radio and television shows whose books this past year included SCIENCE-FICTION THEATRE and THE SHADOW, both of which I proofread. The former tells the fascinating behind-the-scenes story of a now obscure but pioneering sci-fi TV series that's more interesting than many of the low-budget episodes themselves. The latter is one of the absolute best books of its type, giving a minutely detailed history of the long-running and legendary SHADOW radio show and contrasting it with the related but very, very different pulp series of the same name. If you go here to order copies, BOOKSTEVE'S LIBRARY gets a small cut to help keep us on the Net!

Speaking of Martin, BOOKSTEVE RARITIES is the site we run together in which Martin's extensive collections of rare and otherwise unavailable movies and TV shows are offered at low, low prices on DVD and again the BOOKSTEVE blogs earn a percentage of all orders. If you're a B Western fan in particular, THIS should be your one-stop! Updated monthly with new and amazing obscurities, we strive to offer the best deals, the best quality product and the best service!

When it comes to BOOKSTEVE'S BOOKSTORE PLUS!, the products form there come directly from BOOKSTEVE'S LIBRARY and are all one of a kind, unique collectibles for the right person on your list. Take a look around here for the ever-changing, updated daily bargain pop culture treats!
Posted by Booksteve at 9:00 AM