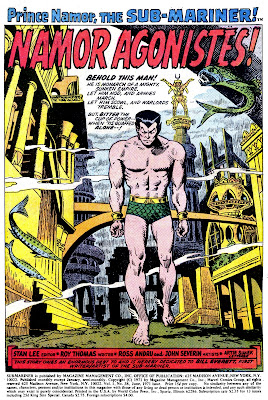 Okay, here we have a good one. Under a Marie Severin cover  we find this lovely splash penciled by Ross Andru and inked by Marie's brother, John Severin.

Andru was newly arrived from more than a decade at DC. Oddly enough, his longtime inking partner had been Mike Esposito who had been the most consistent inker on this title...and yet he wasn't used here. Andru was later said by Sub-Mariner creator Bill Everett to be very hard to ink as his pencils were very scratchy. Severin's inks are generally overpowering making anyone he inks look as though it was drawn by John Severin...but this is not a bad thing.

This whole issue, although it does peripherally tie in to recent continuity, smacks of a fill-in as we have a brand new--and yet not to be seen again--art team essentially recounting Subby's origin.

The image of a grieving Namor is, as in most recent issues, nicely framed. There's enough periphery to indicate the fact that the scene is underwater. The only problem I have (besides the nightmarishly RED credits box at the bottom) is the fact that all the buildings in Atlantis seem yellow for some reason. Huh?

The typically pretentious title fits the mood of the story and the current ongoing storyline as Roy's stories continue in the darker vein they've hit in recent months.
Posted by Booksteve at 12:48 AM