Movies That Fell Through the Cracks # 70 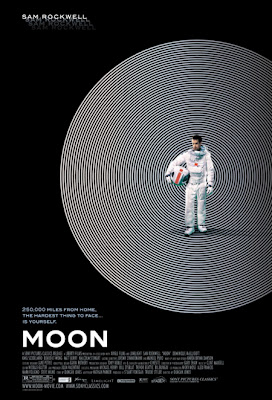 Unlike most of the films mentioned here, this one is recent and while it wasn't a blockbuster, it wasn't exactly forgotten either. That said, I had somehow missed it until recently...and it's quite good.

Similar in style to 2001: A SPACE ODYSSEY and SILENT RUNNING, 2009's MOON is serious science-fiction about a man in the last weeks of a three year stint on the Moon for a mining company. Sam Rockwell gives a tour de force performance. Alone with his computer (voiced a la HAL by Kevin Spacey) he meets someone who shouldn't--couldn't--be there.

To say anything else would be to cheat the viewer of the full experience. If you're a sci-fi buff, seek out MOON and enjoy.
Posted by Booksteve at 8:50 PM