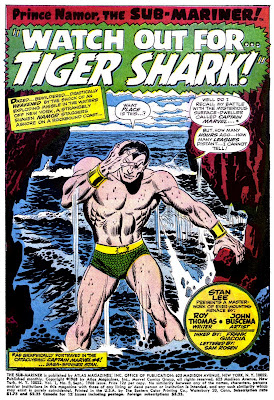 Okay, we come now to issue five from 1968 and it's a good one, still from the Buscema/Giacoia team. The image has a nice perspective, Namor is nicely framed and the water really looks like water. I like the col

oring and, plot-wise, we're simply referencing a guest appearance in CAPTAIN MARVEL since last issue in order to mover on with this one. Even the title logo adds to the framiing effect with the jagged "Tiger Shark." This was, in fact, the first appearance of a new major villain for the Sub-Mariner. He also got a cool cover!
One does have to wonder just exactly why all male characters in comics were curiously nipple-less. That fact probably made more than one little boy think he himself was deformed!
Posted by Booksteve at 1:04 AM