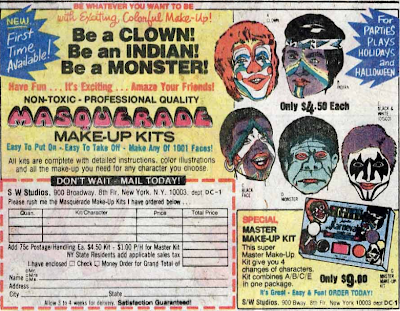 Here's a politically incorrect comic book ad from...1978!! One might expect to find this sort of thing in 1940's comics but by 1978 we were, as a society, moving beyond a point where "black face" was acceptable. And yet here it is, alongside the equally politically incorrect "Indian" makeup and a "Disco" makeup that comes close to being actionable by KISS. I do kind of like that clown makeup, however.
Posted by Booksteve at 1:20 PM