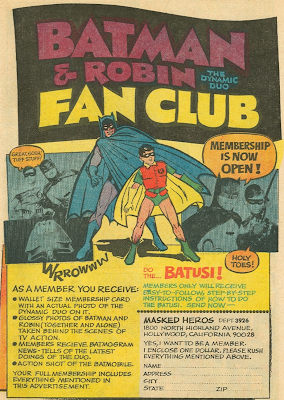 There were undoubtedly dozens of Batman fan clubs during the height of Batmania throughout 1966 and into 1967. This one may have had the coolest ad, though. What did you actually get for your hard-earned buck? Well--a cardboard membership card most likely, glossy photos--it doesn't say how many or how big. I'm betting very few and very small--an "action shot" of the batmobile (not even glossy!) and probably a foot placement chart on how to do the Batusi...even though the only memorable part of it was with the arms and hands. "Tuff stuff," indeed.
Oddly, this cool ad never appeared anywhere--to my knowledge--other than in the superhero cash-in CAPTAIN MARVEL comic from Myron Fass. "SPLIT!" That guy.
Oh, and I know it's a simple coloring error but you gotta love Robin's mis-matched gloves. Holy non-conformist!
Posted by Booksteve at 9:13 AM