Movies That Fell Through the Cracks # 67 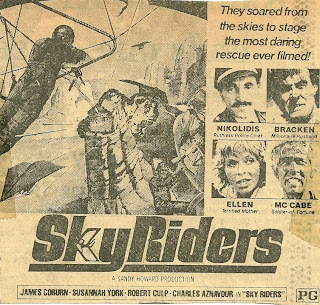 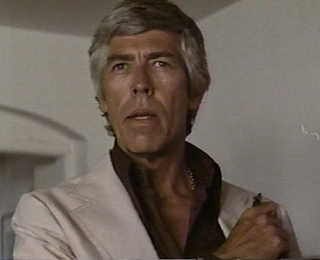 SKY RIDERS from 1976 (aka ASSAULT ON THE FORBIDDEN FORTRESS--a much cooler title in my opinion--and INTERVENTION DELTA, presumably a re-release or video retitling) is one of scores of forgettable seventies action films that often featured big stars.
Here the biggest star was James Coburn, the man with the flashiest grin in the history of films. Coburn had started out on TV and in films playing mostly bad guys but came into his own with OUR MAN FLINT and its sequel in the mid-sixties, both out-Bonding 007. Suddenly he was the epitome of sophisticated hipness. By this point a decade later, though, that image wasn't doing him as much good and lesser and lesser vehicles showed it.
Robert Culp and Susannah York (both of whom passed on in 2010) play parents whose children are kidnapped. This being an action film, rather than allow the police to investigate, her ex-hyusband, Coburn, decides to rescue the kids through the use of hang-gliders.
The glider footage when it comes is the real star of the film as one might expect. Six writers are credited. SIX! That's rarely a good sign. Director was Douglas Hickox whose biggest credit would probably be Vincent Price's THEATRE OF BLOOD from a couple years earlier.
Also in the cast were reliable character actors John Beck and Harry Andrews, actress, model and cult figure ZouZou and French singer/songwriter/actor Charles Aznavour who, during the seventies, attempted with little success to become better known internationally.
Like most action films of that era, SKY RIDERS is not bad. It just isn't good. You see it, you forget it, you move on.
Posted by Booksteve at 5:18 PM