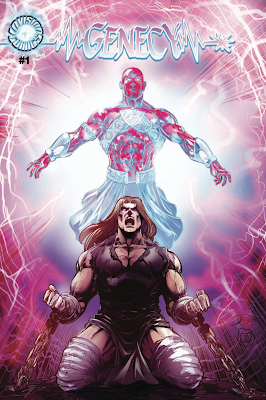 Gerald Cooper from Invision Comics recently sent me a review copy of the first issue of his new comic book, GENECY. This was, of course, a risk as I'm on record as not particularly liking most new comics, especially if they don't even feature familiar characters.
I like GENECY. I REALLY like GENECY.
Surprised me, too, actually. If you absolutely have to have a hook, Cooper explains that it can be described as "What if Conan became the Silver Surfer." That said, the execution of the book and its story are done so well that there's much more to it than that.
Master comics artist Gil Kane once famously said he hated origin issues.GENECY # 1 is an origin issue. As such, it's essentially an introduction and you don't actually get a feel for what the series will really be like.
What you do get is some excellent storytelling, clearly influenced by both film and comics but taking great advantage of the uniqueness of the comics format. One of the highlights is the consistently creative use of lettering (as seen in the panels here). 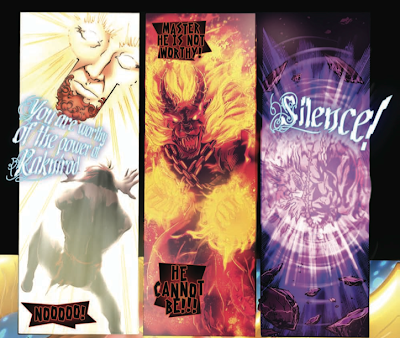 The plot is derivative but I've never minded that as long as it's handled well and here it most certainly is. It takes itself quite seriously but grabs the reader's attention right from the beginning and flows smoothly from panel to panel and scene to scene leading to the climactic transformation scene that sets up the coming issues. Gerald Cooper's writing and dialogue are solid and, as stated, the lettering adds much. There is no credited letterer so not sure if the artist did it or...?
The interior artist, by the way, is Eddy Barrows. If he has other credits, I am not familiar with them. It looks vaguely akin to nineties-style Image art only with better panel flow. Parts of it also remind me of various eighties indy comics. Most or perhaps ALL of the art appears to be computer generated or at least strongly computer-colored by Tim Ogul and Oren Kramek. I'm not a huge fan of computer-coloring but in this case it's obvious that much care went into every scene. Unlike, say recent DC comics where the computer coloring often makes action pages just look messy and hard to read, here it all goes along almost seamlessly with the art.
Oh, yes, the plot. Essentially you have these slaves on a starship who revolt. One of the slaves is an Obi-Wan type "wizard." As the ship is being destroyed, he gives a "key" to our hero, a long-haired muscleman type, who ends up on the planet below. There he meets demons and an ancient God with whom he makes a pact that will change his very existence.
If I have a complaint about GENECY, it's the logo. A little hard to read. Oh, and the price. $5.00 for 39 pages including covers. That said, in a market where I find so much mainstream and even indy comics to be unreadable these days, this one was fun in a sort of familiar, old-fashioned way yet done up all shiny and new. It will be interesting to see where they take GENECY...and I think I will try to go along for the ride.
You can get your copy here..and I recommend that if you like seventies-style cosmic comics, you do so. http://invisioncomics.com/
ADDENDUM: Okay, I just looked up Eddy Barrows and see he has extensive credits, mostly at DC, in recent years. For the record, none of the titles I refer to above as being so messy were any of the ones he has worked on.
Posted by Booksteve at 3:16 PM