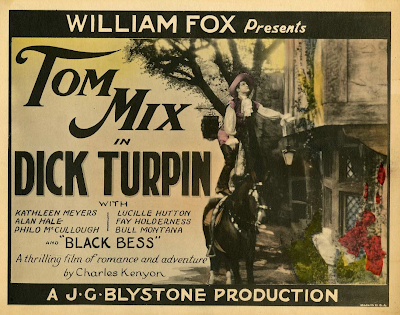 If you haven't checked out my shared DVD site lately, BOOKSTEVE RARITIES, now would be a good time to do so as it's just been updated with new titles for March. The most intriguing of these to me is seen here: a 1925 silent film featuring cowboy legend Tom Mix as legendary British highwayman Dick Turpin!
DICK TURPIN (1925)
A rare Tom Mix movie that happens to be scheduled for the 2011 Cinevent Film Festival. In the 18th Century England, gentleman highwayman Dick Turpin overcomes many difficulties to rescue his sweetheart from a terrible marriage. This was the studio's attempt to give Tom Mix another image other than that of a cowboy. Not sure it would succeed, they gave it a gamble and, while this same story was remade numerous times, the best version is Tom Mix's.
Only seven dollars plus postage. Go here to order:
http://oldtimeradiotapes.homestead.com/StevenSiteHome.html
Posted by Booksteve at 6:08 PM