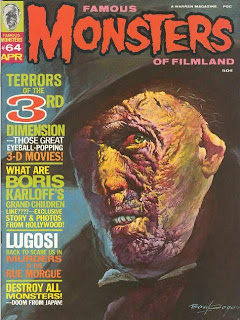 Plenty of other folks are posting marvelous tributes to the just passed Forry Ackerman. I'll just say that I first met him with this issue of his magazine, FAMOUS MONSTERS OF FILMLAND, purchased on a day-trip to Lexington, Kentucky when I was 12. I missed the next two but after that I was a regular, eagerly soaking 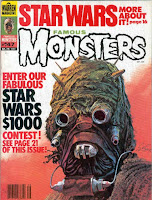 up as much info as I could about monster movies and the men and women who played in them. Karloff, Lugosi, Price, Chaney, Lorre, Rathbone, Carradine, Strange, Cushing, Lee and even Ed Wood-I met 'em all through Uncle 4E. In fact, his was the first autograph I ever received (albeit, as previously noted here, signed "the Ackermonster.") I stuck with FM long past the point where it was repeating itself for another generation, ending my collecting with the STAR WARS cover seen here. Ackerman's occasional reappearances were always noteworthy and in recent months, I was one of many hundreds who became a friend to the ailing Dr. Acula on Facebook, thus providing a grass roots support group that no doubt kept Prince Sirki at bay just a little longer. Thanks for the laughter, the scares and the history, 4SJ. A generation of movie and monster buffs thanks you.
Posted by Booksteve at 9:38 PM