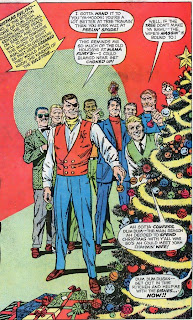 All the cool bloggers are writing about favorite C

hristamas comics this season but I've yet to see anyone mention mine. Perhaps that's because it's dated August, 1968 which, owing to comics dating and shipping peculiarities of the day, means it came out in June of that year!

SGT. FURY AND HIS HOWLING COMMAN

DOS, was, of course, Marvel's "war mag for people who hate war mags." While having little bearing on reality, it was entertaining like an old Clark Gable or Errol Flynn war movie and even made some valid political and social commentary in the late sixties. Traditionally, the summ

er annuals for the title would show the commandos at either a major WWII battle or reenlisted in other wars such as Vietnam or Korea.
Continuity-wise, of course, Sgt. Fury had gone on to become spymaster Colonel Nick Fury, agent of S.H.I.E.L.D. In this particular annual, we revisit the Christmas of 1967 and find Col Fury hanging out at sidekick Dum-Dum's house for a holiday reunion of the old gang. What's perfect about this story is that...nothing happens!! Modok's not hiding in the cranberry sauce (like 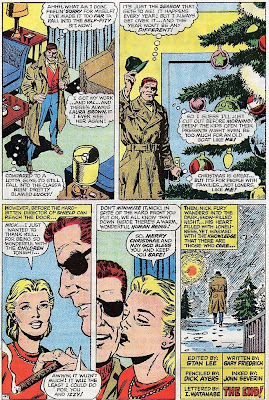 that other time!), A.I.M. doesn't invade the suburbs and the Christmas tree doesn't turn out to be a living alien predator. None of the Howlers are hypnotized, the Hate Monger hasn't spiked the eggnog, Captain America doesn't stumble in fighting the Red Skull and nobody dies!! It's Christmas! Nick simply catches up with Reb and Gabe and Izzy and Pinky and even Eric (who, if I recall correctly, had been thought a traitor at the time in the rgular comic!). Granted the bulk of the story is him boring Izzy's kids with the story of how his guys personally won the Battle of the Bulge but...

Wonderful art from Dick Ayers and the great John Severin (and I swear I detect a hint of an uncredited Herb Trimpe in places, too!) with perfectly in-character dialogue from regular scripter Gary Friedrich. It may have been a summer annual but it became my all-time favorite Christmas comic!
Posted by Booksteve at 7:36 AM