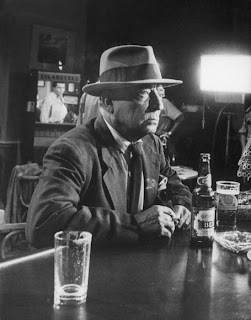 Speaking of Keaton, here's a wonderfully atmospheric shot of Buster found over at IF CHARLIE PARKER WERE A GUNSLINGER, THERE'D BE A WHOLE LOT OF DEAD COPYCATS (http://tsutpen.blogspot.com/). The comedian's career was rather infamously derailed by alcoholism and yet in the late fifties, he was known for a series of clever TV beer commercials. Not sure where this pic comes from and since he looked prematurely aged from the late forties onward, it's hard to date. Not wearing his traditional hat though. Could be from real life. Check out the above site for tons of rare and unique photos.
Posted by Booksteve at 7:11 PM