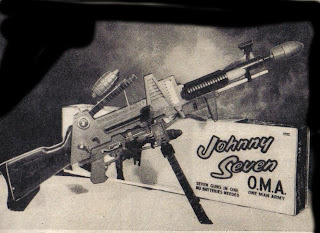 Here you have one of my favorite Christmas Presents circa 1966 or 67. JOHNNY SEVEN. This was a "toy" gun in the sense that it wasn't real but it weighed a freakin' ton, had all kinds of connecting and disconnectable parts and was virtually impossible to 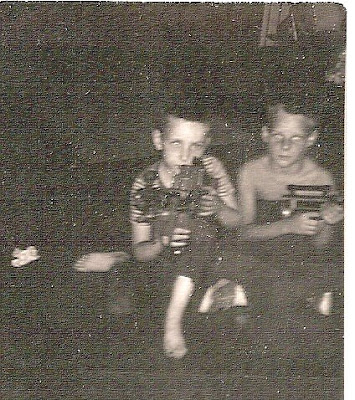 actually "play" with as a seven or eight year old really could NOT lift the damn thing! The name comes from the fact that it could be used as seven different weapons. The pistol was detachable, there was a grenade launcher, a rocket launcher and others I don't recall and can't immediately recognize from this picture. I kept it behind the couch for a couple years and it earned me a lot of points with new kids who came to visit just because it was cool and most kids wanted it and never got it. I finally traded it to some kid--possibly the one seen here (holding my much easier to handle SECRET SAM gun) next to a young and shoeless booksteve--for some coverless Marvels. I believe I probably pulled a muscle lifting that gun for this photograph!
Posted by Booksteve at 8:11 PM