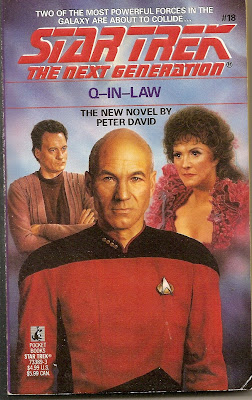 STAR TREK's undisputed First Lady, Majel Barrett-Roddenberry, died yesterday. As everyone who cares already knows, Majel was 2nd in command in the original pilot with Jeff Hunter, McCoy's nurse in TOS, Troi's "Auntie Mame" momma in ST-TNG, a whole bunch of voices in the animated series and the voice of the future in all incarnations up to and including the one coming out next year!

My wife, along with many lovestruck young ladies throughout the world related strongly to Majel's Christine Chapel character. Chapel was the soft-spoken medical assistant who secretly loved Mister Spock. The character was a far cry from that of her best role, however--Lwaxana Troi! This was a bold, brassy, loud character, always in motion in some way, always a step ahead of--or outside of--reality. Her infrequent appearances opposite Captain Picard were popular and akin to those of John DeLancie's Q in that her episodes were always over the top. 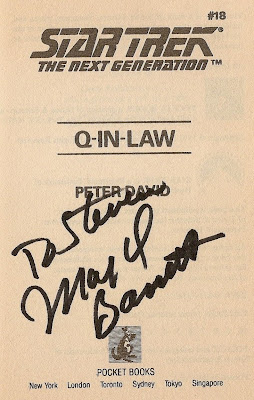 Now back in the day, we went to a LOT of STAR TREK conventions. One of the biggest and best was an early nineties CREATION con in Cincinnati in which John DeLancie and Majel performed the very first of only a handful of live readings of Peter David's delightful and appropriately over the top STAR TREK-THE NEXT GENERATION novel, Q-IN-LAW in which the two bizarre characters actually wed!

Now we had met a lot of celebrities by that point and most--especially the STAR TREK stars--had been very nice. I suppose there's something about meeting someone you felt a kinship with from an early age, however, that makes it a little different. As with most CREATION cons, there were strict rules for meet and greet. Majel, however, like Lwaxana, apparently didn't care for them so she grabbed a friendly dealer and asked if she could sit at his table and talk to fans. We were nearby and joined the quickly forming line. As we approached, my wife was kind of hyperventilating. I reminded her how nice Michael Dorn had been...Nichelle, Walter, George...Marina, Gates and good ol' Shatner-dissing Jimmy Doohan. Didn't matter. I got up to Majel and had her sign our copy of Q-IN-LAW (intending full well to get DeLancie's signature later but his line would be too long) as seen here. Then Rene spoke...or attempted to. Majel smiled pleasently, almost as if she'd seen the symptoms before. She asked my wife's name but words failed her so I told her myself, adding that she had always been an absolute favorite to her. She smiled again as I dragged my jabbering wife away to make room for the next person. She's since met the Clintons, Tipper, Lieberman, Susan Sarandon, Courtney Love, Melissa Ethridge and other world players and my lovely wife takes them all in stride. Rest in peace, Majel Barrett-Roddenberry. You were the only one who left my wife speechless.
Posted by Booksteve at 8:42 PM