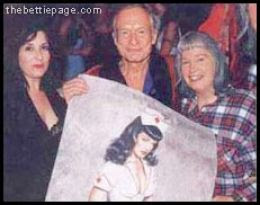 The blogosphere is quick to report yesterday's passing of pin-up icon Bettie Page, hospitalized last week. To say that Bettie transcended her time is one thing but, in a very real sense, her image transcended the real woman and will most certainly continue on now without her. I mentioned her widely-reported health troubles last week to a 55 year old male co-worker and he had never heard of her. He had no doubt seen the familiar look, jet black hair with ever-present bangs in often-kinky lingerie and yet somehow had never connected it to a specific person. More than one friend has suggested that the real, human, troubled person that she was was much less interesting and thus much less important to them than the image she became. Such is the problem with fame, laid open in her case by her decades-long disappearance. When she did finally turn up, reportedly somewhat surprised at being remembered at all, let alone being the object of cult adoration, the former PLAYBOY centerfold refused to be photographed at first, saying she wanted people to remember her as she had been. She relented perhaps only once a few years ago (seen here) with her old champion, Hugh Hefner, and she still looked great!


I discovered Bettie (her actual spelling) in the mid-seventies through articles and photo-features in magazines I was too young to be reading in the first place. Whether nude or wearing sexy lingerie or even fetish gear, she always seemed to have a sense of fun that other pin-up models missed. Dave Stevens' ROCKETEER in the eighties brought her image back to my mind and that of a whole lot of others. Greg Theakston's THE BETTY PAGES became required reading and various books appeared (including photographer Bunny Yeager's, seen here), reprinting her photos and her legend. There was even a bio-movie! That there was a real person behind all of that may not even be that important in the grand scheme of things but real people should count. They should. And today, at least, all of us who ever blushed or smiled or stirred at a picture of the 1950's most famous pin-up queen, should pause and thank her at her passing. Thanks for everything, Bettie Page.
Posted by Booksteve at 4:36 AM