Here, from 1940, are several unusual panels from Alex Raymond's classic Sunday FLASH GORDON strip. These panels feature our hero, Flash, dressed in an oddly familiar red and yellow costume...with a lightning bolt on it. Hmm... In the plotline, it's said to be a rubberized uniform for handymen (check the real utility belt) but note him being 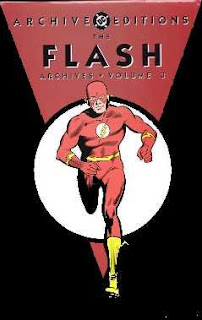 heroic...and running. Makes you wonder if Julie or Carmine or somebody, in the back of their minds, remembered this sequence when DC revived their hero, THE FLASH (also 1940) about 16 years later.
For the record, it also strongly resembles the costume of T.H.U.N.D.E.R. Agent Lightning albeit with somewhat inverted color.
Posted by Booksteve at 6:36 PM