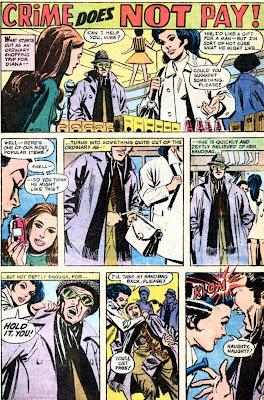 Anyone out there know the story behind this one? This is a two-page featurette from WONDER WOMAN 188 (1970). According to the Grand Comics Database, the uncredited writing and art is by Mike Sekowsky, at the time the guru behind the controversial "new" Wonder Woman. The inking is rather obviously by Dick Giordano who, imho, did the absolute best version of the Diana Rig...err...Diana Prince Wonder Woman. What's fascinating about this otherwise throwaway piece is that the villain is revealed to be one "Creepy Canigah." That's "Canigah," presumably pronounced as "Kanigher" as in WW's former editor/writer, Robert Kanigher (discussed here yesterday!). 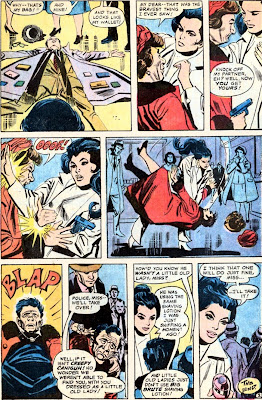 Okay, so was this Sekowsky actually commenting on Kanigher who had reputation for being egotistical and not well-liked? Was he attempting to say he was literally or perhaps metaphorically (by writing WONDER WOMAN) a transvestite or was it all just a good-natured rib at a fellow creator? Anyone?
Posted by Booksteve at 8:32 PM