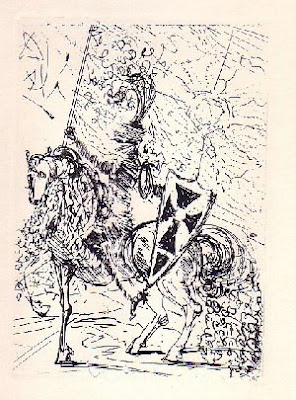 One of my favorite things about living with my late mother-in-law (which my wife and I did about 15 years ago) was admiring the two Salvador Dali prints she had. As longtime readers might recall, she passed on nearly a year ago and as we began to clean out her things, the Dalis were nowhere to be found. It was presumed that she sold them as she sunk deeper into illness in recent years. Then, this weekend, as I was digging through the back of a downstairs closet trying to finish the long drawn out cleaning process for a pending sale I found a large sealed box and in the box...the Dalis!
The pictures seen here are from the Net, not scans (they're too big for my scanner)but this is them! EL CID is from a 1968 unlimited series of etchings. Although signed only in etching it is a fascinating piece--part of a selection of 4 heroes by Dali--and 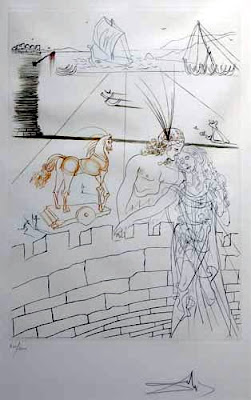 I used to admire it for long minutes at a time.
The second is my favorite though. PARIS AND HELEN OF TROY, done in multiple colors and highlighting several of the artist's surrealistic trademarks, is signed and numbered. Number 237 out of only 1000 prints made. Although signed in pencil in the lower right hand corner, it's interesting to note that in latter days, Dali apparently decided it would be quite surreal to have someone other than Dali himself sign his prints! Thus there may be no way to tell if this was actually signed by him even though it IS an official print!!!
Posted by Booksteve at 4:33 PM