Movies That Fell Through the Cracks # 39 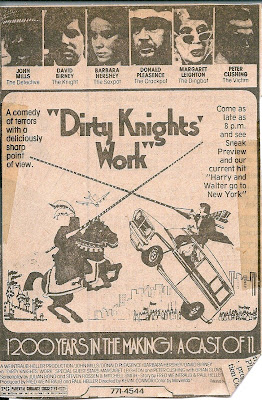 DIRTY KNIGHT'S WORK (AKA TRIAL BY COMBAT) was barely released in 1976. Produced by Fred Weintraub and Paul Heller, the folks who had brought you Bruce Lee's ENTER THE DRAGON just three years earlier it proved to be yet another strong hint that they might be one trick ponies. It's an interesting premise. A society of medievel recreationists enforce their own system of justice in present day England. When they kill off old Peter Cushing (right around the time he would have been making STAR WARS) though, his American nephew comes to investigate. Familiar TV face David Birney is the nephew and while he was never a major presence, he certainly always was a pleasure to see in anything. The great supporting cast includes Donald (HALLOWEEN) Pleasance, Sir John (father of Hayley and Juliet) Mills and British mainstay Margaret Leighton in her final film--she died that same year. The film's director was Kevin Conner, a journeyman who started out doing cheap horror films like the cheesy MOTEL HELL and the wonderful Amicus anthology FROM BEYOND THE GRAVE ( also with Leighton and Cushing) and more recently has become a dependable TV movie helmer. As far as the ad itself which was for a preview, I can't help but notice a seeming attempt at Pythonesque humor. HOLY GRAIL was also released in 1976.
Posted by Booksteve at 8:16 AM