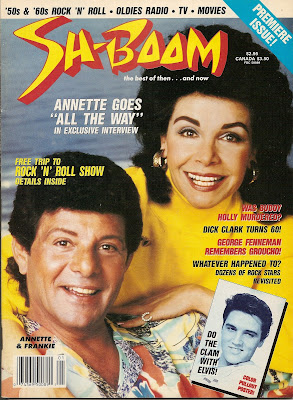 Here we have yet another "off the shelf" item chosen more or less at random. This is the premiere issue of SH-BOOM, a late eighties- early nineties pop culture nostalgia magazine aimed squarely at baby boomers.
Informative and obviously written by people who care about their subjects, this issue offers a major article/interview on Annette Funicello (before she got sick), a rare late interview with Groucho’s YOU BET YOUR LIFE sidekick George Fenneman, some classic TV bits, some old time rock’n’ roll reviews, Dr. Demento on "dirty" rock classics and an Elvis centerfold featuring this image of what I’m sure is an uncredited Teri Garr. There’s also Dick Clark, Buddy Holly, a history of Jukeboxes, the late (great) Johnny Ace and, perhaps amazingly, the wonderful cult actress Mary Woronov!
I know I have more issue of SH-BOOM aro

und somewhere (including one in which Pat Boone addresses the claim that he ruined Little Richard’s songs by homogenizing them) but I’m not certain how long it ran. One thing’s for sure, though. As with much of the baby boom era itself, it sure was fun while it lasted.
Posted by Booksteve at 9:42 AM