Movies That Fell Through the Cracks # 40

There was a time in the late sixties-early seventies when I thought Gayle Hunnicutt was a big movie star. This probably had to do with the f

act that one of the very first movies I saw in a theater without my parents was EYE OF THE CAT, a pretty darn scary 1969 feature that also starred Michael Sarrazin. Turns out she made a pretty steady go of it but never quite made it all that big, bookending her career with TV guest roles. In the mid-seventies, however, she was working a lot in Europe and in 1975 this curious import turned up at a local theater.
Along with the lovely Ms. H, the ’74 French superthief caper film SHADOWMAN offers Charlie Chaplin’s (other) daughter, Josephine, Gert (GOLDFINGER) Froebe (as a policeman!) and Jacques Champreux as the title character. I remember that the film had something to do with a secret treasure of the Knights Templar (some thirty years before that became a trendy plot device!) 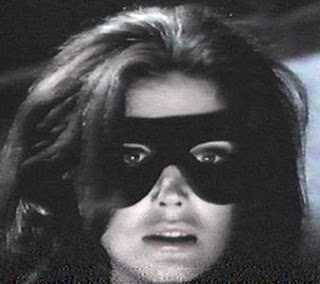 but that it all seemed very muddled. I assumed at the time that it had lost something in the translation but consulting IMDB, I note that the whole thing was compressed from an 8 episode TV series so no wonder it made no sense!
Jacques Champreux is also listed as the writer but as an actor it appears to be his final appearance. Interestingly, one of my wife’s favorite authors, Henry Lincoln (HOLY BLOOD, HOLY GRAIL) is credited with appearing as a Templar expert (naturally). Even more interestingly, backtracking Lincoln’s career I see that he wrote a DOCTOR WHO serial with Troughton’s second Doctor in the late sixties!
All of this makes me want to see L'HOMME SANS VISAGE, the series this was based on. I may not recall too much about it but, paired with an "Anthony Steffen" spaghetti western, I remember SHADOWMAN being a fairly enjoyable Saturday afternoon for my 16 year old self…and Gayle Hunnicutt didn’t hurt my eyes at all.
Posted by Booksteve at 9:21 PM