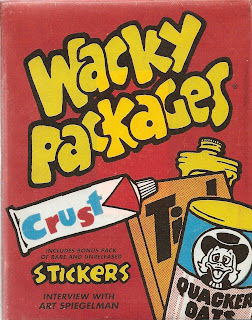 Thanks to friend and ace researcher DEREK for bringing the new WACKY PACKAGES book to my attention. WACKY PACKAGES were, for awhile, a favored obsession of the young Booksteve. 1967 through '69 were my years of interest in this subversive MAD-style look at advertising. Originally, they were done in die-cut baseball card-like cards that you would trade with your friends. In the early seventies and off and on ever since, they were reissued as stickers. It's the 1973-74 versions that are celebrated in this cool little book.

The book itself is nicely designed with the dustcover being on a kind of rice paper that evokes the wrappers of the original cards. The actual covers of the book even depict a piece of that hard gum that used to come with all of these things (cracked on the back cover). Nobody I knew would ever dare to actually chew that gum!

Bookending the single page depictions of the stickers themselves are interesting and informative pieces by former underground cartoonists (and now respected artists) Art Spiegelman and Jay Lynch, both of whom worked at Topps during the WACKY years. WACKY PACKAGES is a quick read, a nostalgic half hour and it even elicited a few real chuckles but on balance, I'd have to agree with Spiegelman's intro that concludes it all works best when you are (or in my case were in 1967) 8 years old.
Posted by Booksteve at 7:28 AM