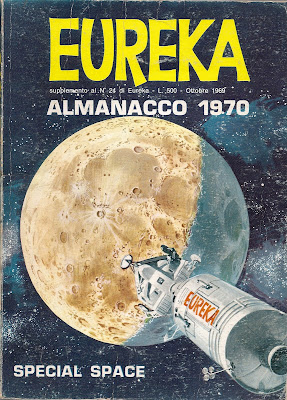 When I was a teenager in the early 1970’s, the folks at the Ohio Book Store in downtown Cincinnati were kind enough to take my name and call me whenever they got some Golden Age comics in stock. I would usually be able to get one or two even though they were horribly overpriced at about five dollars each! I don't get downtown very often anymore but when I do it’s always a pleasure to see that in spite of all the changes in the city, the same folks are still running the same store in the same location. They don’t get Golden Age comics anymore either but I can still find cool stuff there. Today a recently transplanted friend asked me to show her downtown and we walked across the bridge—my first time in about twenty years! Of course one of the places I showed her was…the Ohio Book Store. As usual, I found something to buy and, in spite of money being tight (again) I had to get it! The rule is, "If you’ve never seen it before get it now or you’ll never see it again." I got it.
What I got was EUREKA, a 1970 Italia

n comics annual ( actually dated October of 1969) tying in to the recent moon landings by reprinting American and English sci-fi comic strips! Unfortunately for me I don’t speak Italian so unless I type the whole thing into BabelFish, all I can do is enjoy the great artwork on some rarely reprinted strips. What we have here is Frank 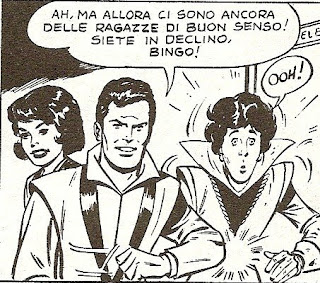 Bellamy’s classic GARTH (albeit here by someone called Steve Dowling), a couple of the Wally Wood/Will Eisner OUTER SPACE SPIRIT sections, George Tuska’s 1963 version of BUCK ROGERS, BRICK BRADFORD by Paul Norris and DRIFT MARLOW (a neatly drawn 1964 strip by Tom Cooke that I confess to being totally unfamiliar with until today). There’s even a few MR. MUM strips, another silent strip apparently called PERKINS and an Italian language article on Neil Armstrong and Apollo 11. About all that's missing is JEFF HAWKE and FLASH GORDON! What's here is a great collection, however, that's easy to enjoy in any language...especially for $3.25 American nearly forty years later!
Posted by Booksteve at 7:12 PM