Back in a Flash 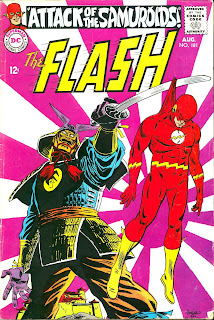 Meanwhile, back at THE FLASH…when we last left our hero (in 1968’s issue 180) he’d been captured by Japanese war criminal Baron Katana and his army of flying robot samauroids. Writer Frank Robbins continues to play fast and loose with continuity 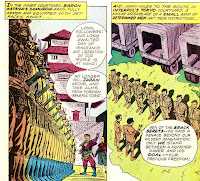 , common sense and humor here in the final chapter. By now the "ranguage" joke had long since run its measly course but it was back in full force as Capt. Hashi and his "Brack Berets" prepare to invade the baron’s island. Note that even when he’s not talking to anyone except other Japanese, they are still BRACK Berets and not BLACK Berets! This in spite of the caption indicating that it only seems characters are speaking good English when they’re actually speaking translated Japanese! Ugh 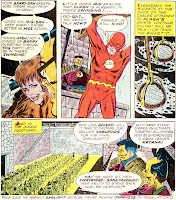 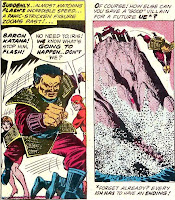 e also the bad puns in the seemingly serious situation which finds the Scarlet Speedster ("Red Suit") suspended by a torture device. To add insult to injury, when the bad guy IS finally defeated, the caption states that he runs nearly as fast as Flash! Oh, really!!?? Then we have another breaking the fourth wall reference and even a reprise of the previous issue’s stupid "ue" joke! Oh, and did I mention that Iris rather casually gave away her husband’s valued secret identity to a girl she had only just met in order to protect it and save the Flash? Or that as the story ended, Barry let her keep this knowledge and even smiled about it??? Why,

Superman would spend the whole next issue trying to figure out a semi-humane way to make her forget but then she’d suddenly catch a deadly disease and die anyway, keeping his secret safe. That’s the difference between the Silver Age Clark and the Silver Age Barry—Barry just laughs!
Oh and the issue is rounded out with a full pa

ge introducing the reader to the man who had just perpetrated two months of weirdness on them…complete with even MORE politically incorrect Japanese "ranguage" jokes!! AAAAAARRRRGGGHHHH!!!!
Posted by Booksteve at 4:16 PM