Batman and Superman on Sesame Street 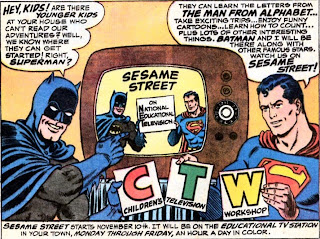 The other day Mark Evanier mentioned that Frank Oz, the muppeteer who handled Cookie Monster, Grover, Yoda and Miss Piggy) had retired awhile back. Also in the news this past week was the passing of the man who designed Big Bird’s suit. All of this put me in mind of SESAME STREET. It’s ubiquitous now, of course, and whole generations have grown up with the show but the very first time I ever heard of it was from this ad right here.
I’m not sure the Man from Alphabet made the final cut. Don’t remember him at all. There’s no mention made of Susan, Gordon, Bert, Ernie, Big Bird, Bob, Grover or Cookie Monster, all of whom were there right from the beginning as I recall. Rather obviously—this WAS in a DC comic after all—strong emphasis is placed on the appearances of Superman and Batman. Now here’s the thing. I was 11 years old at that point but I watched SESAME STREET pretty regularly when it started. I enjoyed the infectious songs (particularly Bob McGrath’s Dennis Day vibe), the Muppets comedy and the little semi-psychedelic shorts starring Jim Henson but I never saw the superheroes. In fact, it was more than a year into the series when I finally saw a really short bit of animation with Superman counting and that was it! Was there some sort of problem or did their prominently advertised appearances go the way of the Man from Alphabet due to behind-the-scenes decisions? If they ever did turn up and I just missed them then why can't I find it all on Youtube now? Everything's on Youtube!
Somewhere here we have a marvelous book on the making of SESAME STREET but I don’t recall anything on the subject in it (and I’m not awake enough to go looking for it at the moment). Years later I met Gordon but it was Gordon number three (Roscoe Orman) who wasn’t there himself for a few years so I didn’t ask ‘cause I didn’t think he’d know. Besides, I had caught him sneaking a cigarette out by the trash dumpster at the mall where I was working and he was doing a three times a day "One of these things is not like the other" show. Timing seemed off, y’know.
Posted by Booksteve at 8:54 AM