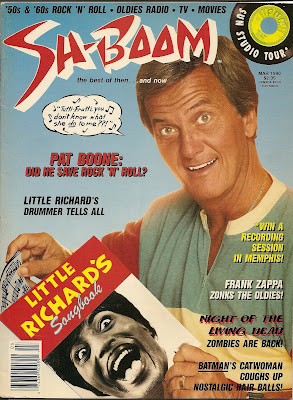 Here’s the other issue of SH-BOOM I mentioned the other day. I love that cover. Always enjoyed Pat Boone as an actor when I was growing up (not that his film career was any great shakes) and it’s great that this staunchly religious man has maintained such a great sense of humor about himself and his own reputation.
This issue starkly contrasts Pat’s (arguably correct) view that his bowdlerized versions of somewhat raunchy Little Richard songs saved rock ‘n’ roll with the reminiscences of Richard’s drummer about partying that makes that legendary shark story look tame!
Also in this ish, interviews with Julie Newmar (the REAL Catwoman) and the great Frank Zappa (during his voice of reason) phase. Feature pieces on NIGHT OF THE LIVING DEAD, Bo Diddley, Sun Records and 21 black musical pioneers round out the issue along with brief appearances from Don Adams, Kirk Alyn, Sheb (PURPLE PEOPLE EATER) Wooley, and Patty Duke!
Great stuff! Anybody got any other issues?
Posted by Booksteve at 7:57 PM