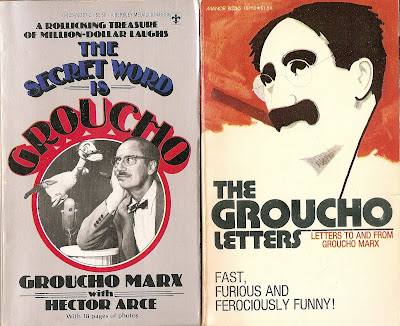 When I was growing up, no one in my life had a mustache. Every single day, my father boiled washcloths, sat with them wrapping his face for about ten minutes, then lathered up and scraped his face smooth. I just assumed that everyone else in the world did that, also (women, too, I guess). Everyone except Groucho Marx, that is.
Some of my earliest memories involve arguing to stay up past my bedtime just so I could watch an ugly stuffed duck come down from the rafters on YOU BET YOUR LIFE when someone said the episode’s secret word. I succeeded often enough that Groucho became an early TV favorite and just about the only man I knew who had facial hair until I started watching Walter Cronkite on the news. Of course at that stage I didn’t have a clue that this funny looking man, his cigar and his peculiar way of speech had ever done anything other than be quizmaster on a show that took its own sweet time to get to the quiz anyway!
It was the early seventies when Marx Brothers films were being rereleased and the first one I saw was the lesser ROOM SERVICE (double-featured with KING KONG simply because they were both RKO productions but I was intrigued by the young Groucho and his mismatched brothers, Harpo and Chico. For example, that mustache in the movie looked…well…painted on!! WTF??
Not long afterwards I saw a re-issue of A DAY AT THE RACES followed soon afterwards by the highly touted re-release of the long legally held back ANIMAL CRACKERS. Soon afterwards, I saw for the first time what would become one of my all-time favorite comedies-DUCK SOUP! Little by little, I was seeing in Groucho qualities (and lines!) I’d already found in another of my heroes, Bugs Bunny!
About this time, I realized that the man I had known from my earliest memories was becoming a cult figure to the anti-establishment crowd and I started seeing the older, sadder Groucho appear on talk shows and variety shows. In the bookstores, there were a half-dozen Marx Brothers biographies as well as a number of books by the one, the only Groucho himself (like Bob Hope, in conjunction with co-writers).
Perhaps the most telling of all the books is THE GROUCHO LETTERS. Being as it is just a compilation of letters to and from the man with the mustache archived from various points in his career, the reader paying close attention finds more of the real man in it than in any other bio. The triumphs, the regrets, the hopes, the dreams, the tragedies and certainly the legendary wit of the man who was SO much more than a quizmaster come through on every page.
As the mid-seventies approached, Groucho’s health worsened ev 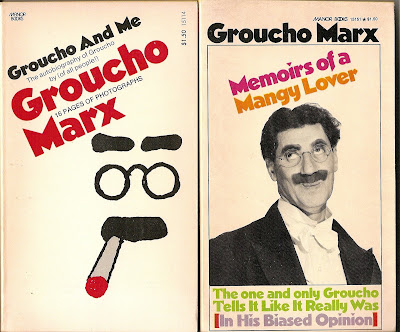 en as his reputation soared! He even made Richard Nixon’s fabled "Enemies List!" His handlers continued to trot him out in exploitation, a sad reminder of his former self (ask Mark Evanier about his Groucho/WELCOME BACK KOTTER story sometime). Rumors swarmed of mistreatment and tragically some were found to have been all too true.
Groucho Marx, the man, died thirty years ago this week, his passing overshadowed by the unexpected death of Elvis Presley a few days earlier. Groucho Marx, like other men, had his faults but in his long and storied lifetime he made a lot of people laugh quite a bit and at the same time—both onscreen and off--promoted a healthy disrespect for authority. Between Groucho and Bugs Bunny, that’s where I learned to always question authority! At the earliest opportunity, I also became the first man in my family to have a mustache.
Posted by Booksteve at 9:07 PM