Mario Bava-All the Colors of the Dark by Tim Lucas 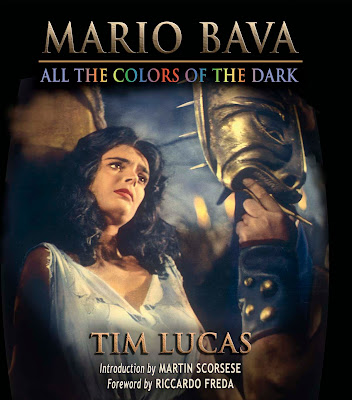 First of all, this is NOT a review. In fact, as intriguing as it is, I may never actually get to read this book due to its steep pricetag of $250.00 US. I wanted to plug it sight unseen, though, as author Tim Lucas (VIDEO WATCHDOG's head honcho) has spent more than a decade eating, breathing and sleeping this definitive bio/filmography of Italian director Mario Bava. I had Tim ( and his lovely wife Donna) for an autographing for his uniquely unsettling vampire novel THROAT SPROCKETS back in the early nineties and we spent much of the afternoon discussing Bava even then!

Known for his stylized, violent horror films such as the classic BLACK SUNDAY, the writer/director/cinematographer also worked on his share of kids films and camp comedy/adventures (including sword and sandal epics and the looking-better-all-the-time DANGER: DIABOLIK) in a career that lasted for more than three decades until his 1980 death. The second R-rated film I ever saw (in 1972 at age 13) was Bava's TWITCH OF THE DEATH NERVE.

Tim Lucas has produced the wonderful digest-sized mag VIDEO WATCHDOG for many years now, offering scholarly looks at less than scholarly films and in the process unearthing amazing behind-the-scenes stories on even the "lowliest" of movies. While other similar periodicals (PSYCHOTRONIC, CULT MOVIES) have faded, I saw VW on the shelf at a Borders just yesterday! All the while, the Bava book was being obsessively worked on with hundreds of interviews and unearthing of incredible stills. It looks as though Tim's obsession has borne fruit. Check out the sample pages at Mario Bava -- All the Colors of the Dark by Tim Lucas, Published by Video Watchdog.
The book arrived at VW headquarters this past week and you can read all about it at Tim Lucas Video WatchBlog.If you're a serious film buff and/or international horror movie fan I recommend you take out a second mortgage and order MARIO BAVA-ALL THE COLORS OF THE DARK as soon as you can. Good luck with the book, guys! I knew you could do it!
Posted by Booksteve at 11:25 AM