Movies That Fell Through the Cracks# 27 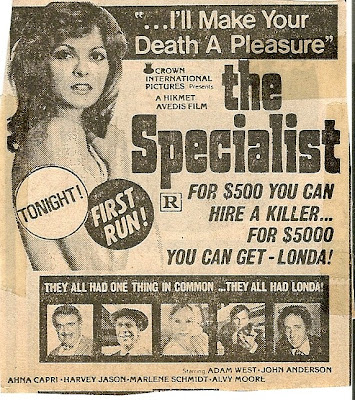 Oh, boy! This should be a good one! Ahna Capri--hot off of her scene-stealing role as a cool blonde in Bruce Lee's ENTER THE DRAGON-- as a sexy professional killer. And it has a bunch of familiar TV faces! Including Adam West!!! And it's from Crown International, the seventies studio that popularized sex and violence in film! Can't wait!

Slow down there, Bunky. No rush. In spite of this kinda cool ad, THE SPECIALIST is, in fact, a fairly talky courtroom piece based on a book entitled COME NOW THE LAWYERS. TV's BATMAN gets top billing for what may have been one of the few times after Batmania died out and carries himself rather well but he ain't no Paul Newman, y'know? Alvy Moore (GREEN ACRES' Mr. Kimball) is there along with the distinguished character actor John Anderson. The music score by Shorty Rogers is probably the picture's most distinguishing feature. Other than Ahna, that is. She IS in the picture...she just isn't the star that the ad would make you believe.
Posted by Booksteve at 11:50 AM