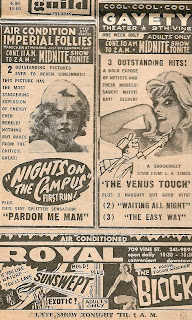 Here from a 1965 issue of THE CINCINNATI POST are a few "burlesque" theater ads. "Nudie-Cuties" and "roughies" are the terms used today for the type of films shown here. Talk about movies that fell through the cracks! Although many of these under the radar sex films have been compiled and collected in the last decade or so, there are literally hundreds that just disappeared! Of the ones shown here, only one was on IMDB and I'm not certain it's the same one because they have it as "HOT" NIGHTS ON THE CAMPUS and coming out a full year later (also directed by Tony Orlando!! Anyone know if that could be THE Tony Orlando?) SUNSWEPT was probably a nudist colony "documentary." You know, the type where you have the cliched naked volleyball games. THE BLOCK actually bills itself as a roughie. The others are literally just titles on the page. Must admit the girl in the CAMPUS ad looks like a young Brigitte Bardot but then, hey, maybe it is! The folks who made these were certainly not above false advertising. My favorite thing in these ads, though, and I recall this from being quickly hustled past these "bad" theaters as a child, is the fact that the big selling point for going in is the air-conditioning! "Cool-cool-cool!" There were huge hanging banners outside the theaters, too. I finally visited the Royal once in its final days and saw a bizarrely edited version of Johnny Legend's TEENAGE CRUISERS. My very first adult film ever...or at least it would have been if the legendary Cincinnati censors weren't requiring that all sex scenes--real or even simulated--be removed from adult films at that time. Thus there was plenty of build-up, a little T & A and then...cut to the next scene. The picture only lasted about a half hour. With the air conditioning left as its only real selling point by that time, the Royal closed soon afterwards. It was the last adult theater in Cincinnati.

Posted by Booksteve at 8:13 AM