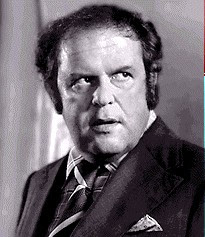 Back in the seventies I developed what I called "the Jack Weston Rule." Essentially. this meant that if the late character actor Jack Weston was in a movie, it would be an exceptional movie…although that might have nothing to do with Jack Weston! Yesterday I caught a bit of THE THOMAS CROWN AFFAIR on cable and was reminded of this rule. That most stylish and stylized of all sixties American films, CROWN succeeds because of its stars (Steve McQueen and Faye Dunaway), its clever script, its direction, its cinematography, its artsy trickiness and its beautiful score (including "Windmills of Your Mind" talk/sung by Rex’s son Noel Harrison, better known for playing Mark "Willie" Slate to Stefanie Powers’ April "Modesty" Dancer in THE GIRL FROM U.N.C.L.E.). Jack Weston is not a memory one takes away from this film. But he IS present!
Weston is also present in FUZZ which turned up on my cable channel a few weeks back. Badly marketed as a comedy, FUZZ was actually a darkly comedic police drama based on the 87th Precinct novels of Ed McBain! Burt Reynolds is top-billed in a marvelous ensemble cast that includes Weston, Tom Skerritt, Raquel Welch and James McEachin (with whom I briefly corresponded a few years ago over the Net!) amongst the good guys and Yul Brynner as the book series’ recurring villain, the Deaf Man. Again, Jack is not a defining factor but he IS there!
Other examples include THE INCREDIBLE MISTER LIMPET, CACTUS FLOWER (one of my wife’s all-time faves!), the marvelously suspenseful WAIT UNTIL DARK with Audrey Hepburn and a truly evil Alan Arkin, THE RITZ and HIGH ROAD TO CHINA. In all of these pictures Jack Weston gives an enjoyable supporting turn but in none of these films is he really responsible for how much I enjoy the picture itself. The Jack Weston Rule was a good rule! It worked, dammit! If only he hadn’t then made ISHTAR. Sigh. Another theory disproved.
Interesting trivial aside: Jack Weston’s brother also started out as a character actor (often as Sam Weston) and appeared in small roles in many sixties TV series including GREEN ACRES and THAT GIRL before becoming a successful porn film director in the seventies under the name Anthony Spinelli! As Spinelli, he was responsible for films such as the acclaimed EASY (with Jesie St. James) and TALK DIRTY TO ME (the original version of which featured Traci Lords’ now taboo debut!). His later credits include PULP FRICTION and something with the amazing title PRINCESS ORGASMA AND THE MAGIC BED.
Posted by Booksteve at 6:49 AM