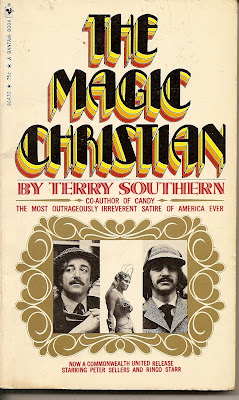 THE MAGIC CHRISTIAN by Terry Southern came out in 1960. As the author’s reputation grew thanks to the success of the movie DOCTOR STRANGELOVE and the controversy over his book CANDY, THE MAGIC CHRISTIAN came to be viewed as a brilliant satire of American life in the late 1950’s. One tumultuous decade later, Southern re-interpreted his book as a film satire of British life in the late 1960’s!
The film version of THE MAGIC CHRISTIAN has a number of things going for it—the soundtrack, the cast, the timing and what was and is one of the most outrageous film climaxes of them all! Unfortunately, it never really gelled and it’s only now, some 37 years later, that it seems to be coming into its own as a cult film.

Ostensibly a series of pretty much unrelated but increasingly outrageous sketches in which the world’s richest man sets out to see just how greedy people can be, Peter Sellers stars at one of his peaks of popularity as Guy Grand. Beatle Ringo Starr, highly touted as a new Chaplin during the Fab Four’s movie stage, puts the lie to that by walking through his role as Sellers’ character’s adopted son—a role not even in the original book! Although often in little more than cameos, the dream cast includes Sir Richard Attenborough, 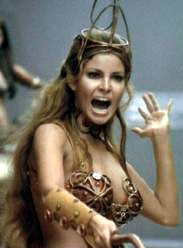 Wilfrid Hyde-White, Laurence Harvey, Christopher Lee (as a Dracula type!), the great Leonard Frey, Raquel Welch (as a whip wielding slave driver in fetish gear with topless female slaves!), THE GOON SHOW’s Spike Milligan, Roman Polanski, a youngish John Cleese (who co-doctored the script with Graham Chapman who also appears briefly), Jeremy Lloyd (creator of ARE YOU BEING SERVED?), Ferdinand Mayne, a number of the CARRY ON regulars and a skeleton in the closet, show-stealing turn by Yul Brynner!

The soundtrack (highly tradeworthy in my pre-teen crowd back in the day) highlights the just emerging BADFINGER with several other great tunes besides Paul McCartney’s classic COME AND GET IT but also features some other gems including Thunderclap Newman’s one-off SOMETHING IN THE AIR (featuring later Wings guitarist Jimmy McCulloch).

Expected to be a huge hit at Christmas of 1969, even the Beatles’ traditional Christmas Fan Club release finds Ringo plugging the picture. In fact, Ringo plugged the picture all over the place, certainly the most visible Beatle during the final days before the breakup.

The problem is that it wasn’t a blockbuster. Sellers career would have to wait half a decade for THE RETURN OF THE PINK PANTHER to boost him back to superstar status. Ringo went straight to the spaghetti western, BLINDMAN, and though he remains quite wonderfully Ringo to this day, he never became a major film star. Writing partners Cleese and Chapman would go on--as part of Monty Python--to create even more outrageous comedy than that found here!