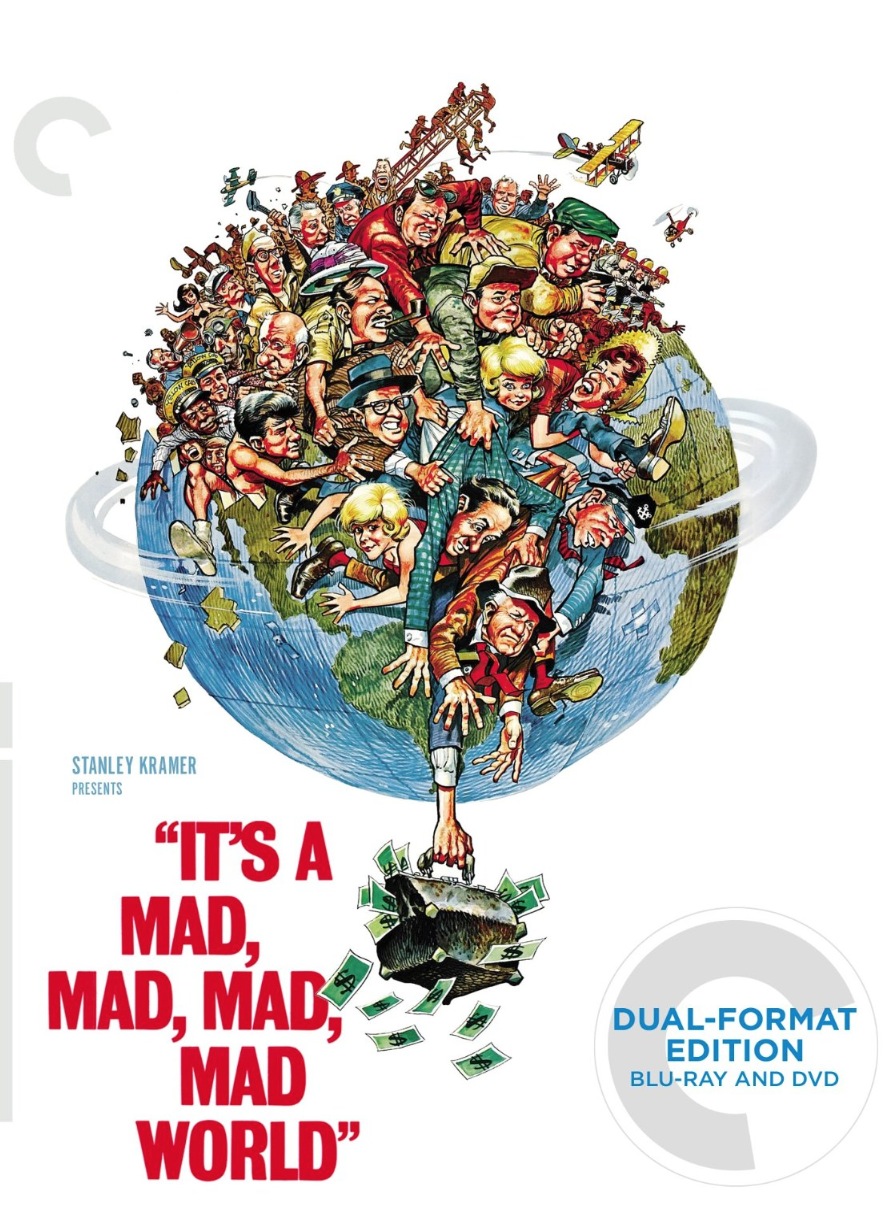 I was lucky enough to catch IT'S A MAD, MAD, MAD, MAD WORLD in re-release in the early 1970s on the big screen. It's a big movie and it deserves a big screen. At the time, I didn't realize just how much BIGGER it had been on its initial run a decade earlier!

This picture was designed to be a salute to excess. Some love it and some hate it. I'm one of the odd birds that are right in the middle of that. When I watched it in the theater, I certainly enjoyed it, but I didn't think it was the funniest picture I'd ever seen even then.

Part of the fun of IT'S A MAD, MAD, MAD, MAD WORLD, though, is in all the recognizable faces on view in the same picture. When I was a teenager, I only recognized about half of them. Heck, this was the first Spencer Tracy movie I'd ever seen!

But my old pal Michael Schlesinger is a champion of the movie, as is blogger/writer and all-round great guy Mark Evanier. Mark's writings about it over the years made me think from time to time that it might be time to revisit the Big W. Then, last year, when I heard that both Mark and Mike (along with Paul Scrabo) would be doing full-length commentary on a newly restored Criterion release that's probably as close to the original road show cut as we're likely to see ever again, my interest was piqued.

THEN, when Mike and Mark appeared on an absolutely delightful and informative episode of the Internet radio show, STU'S SHOW, a couple weeks back, in an episode that ran three hours plus (and included a shout out to yours truly!), I knew I had to get it.

My friend Alan Bryan, whom I had talked into tuning in to STU'S SHOW that evening, was so impressed that he ordered a copy for himself and a copy for me! Thanks, Alan!

And I pronounce it good!

My wife and I sat and viewed IT'S A MAD, MAD, MAD, MAD WORLD on our 50 inch screen (a holdover from back when we actually had cable) that evening. There are two versions--the general release version and the newly restored version with nearly an hour of long unseen footage and reconstructed scenes! We, of course, chose the latter...with the commentary!

I have to say I have never in my life enjoyed a commentary as much as this one. Maybe it's because I actually knew two of the three men doing it but it just felt as if they were right there in the darkened room with us. Never feeling obtrusive, all three men were educational and yet at times nearly as funny as the film itself! When it was over, my wife said that she felt as though she had just attended a master class in film.

And what about the film? If somehow you don't know, it's the story of a group of ordinary people who learn the whereabouts of a great deal of money and set off to find it, forming motley alliances along the way whilst all the while being unaware that the police are watching them...at least one with an ulterior motive.

The main cast is made up of some of the funniest folks in show biz at the time--Sid Caesar, Jonathan Winters, Milton Berle, Phil Silvers, Buddy Hackett, etc. The real fun, though, is that there's hardly a role in the entire thing that isn't cast with a familiar funny face. Jerry Lewis, Buster Keaton, Don Knotts, Jack Benny and many more. Pay particularly close attention and you'll also spot Leo Gorcey, Stan Freberg, Carl Reiner and Jesse White! My wife's biggest laugh came from, of all things, the less than 10 seconds appearance of The Three Stooges!

IT'S A MAD, MAD, MAD, MAD WORLD was directed by Stanley Kramer, a filmmaker noted for his "relevant," "issue" movies and his often-noted heavy-handed approach to same. With its humorous study of the effects of greed on ordinary people, he actually manages to get in some relevant points here even. He went with the "everything but the kitchen sink" approach and, to me, it works. It still isn't the funniest film ever but it's an epic length look at the greed in all of us, with laughs, made more palatable by the many familiar faces and jack-in-the-box cameos.

Extras? Well, as we've said, there's the great commentary. How great is it? I think it's ruined me for other commentaries. The next day I attempted to watch Hitchcock's NOTORIOUS with a typical scholarly, stodgy commentary by 2 film historians and I literally had to turn it off. Besides the commentary, though, you get multiple documentaries and cast reunions from the 60s, 70s and 2000s as well as a collection of Stan Freberg's radio and TV ads (with an all-new introduction), a detailed booklet and even brand new art by the now-retired original poster artist, Jack Davis!