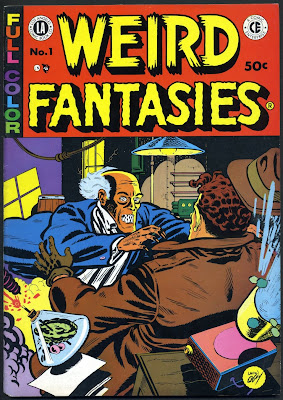 Back in the late sixties and early seventies there were comics and, if you were amongst the cognoscenti, there were also "comix." Although relatively analogous to the indie comics movement of today, the underground comix had a distinct counter-culture feel that simply no longer exists. Some of the underground artists of those days now have works in museums and command thousands of dollars per illustration--a far cry from Robert Crumb selling the early ZAP out of a baby carriage. Although largely associated with the hippie movement, the loose-knit underground "industry" was actually quite diverse and featured liberals, conservatives, anarchists, older and younger artists. The one thing all the creators and publishers had in common was the dream of personal artistic freedom. Before they felt as though they had it, it was important for them to break all the rules, all the taboos. Thus comix earned their "x" with the most explicit illustrations and events ever shown 'til that time!

Me, I was about 13 when I first discovered comix. I ahd read about them in Les Daniels' COMIX but I hadn't actually seen any until then. Technically, the covers of many undergrounds said they were for sale to "mature" readers, not necessarily readers over 18. So my local bookstore, with its head shop in the basement, had no qualms about selling me whatever I could get up the nerve to take up to the counter...even though I'll admit a fondness for seeing some of the dirty stuff. I quickly learned there was a lot more substance to them than JUST that dirty stuff.

Seen here is a selection of some of the first undergrounds--of many--that I ever owned.

The first underground I ever had I got by mail-order from The Los Angeles Comic Book Company. WEIRD FANTASIES # 1, a rare color underground, was designed to look like an EC homage. I really hadn't yet discovered EC so I missed that but it had my very first exposure to the gorgeous airbrush art of Rich Corben. Like nothing else in comics at the time, I fell hard for his work and would later follow it through Warren and various graphic novels. Still a thrill to see the rare new work, today. MOONCHILD by Nick Cuti was also in the issue, just slightly too adult to be a charming children's story. I had no idea at that time that Cuti had worked with my favorite, Wally Wood. He would go on to create E-MAN for Charlton with Joe Staton. Years later, we'd exchange a few emails and he'd become a friend on Facebook. From time to time, he even reads MY Wood blog! 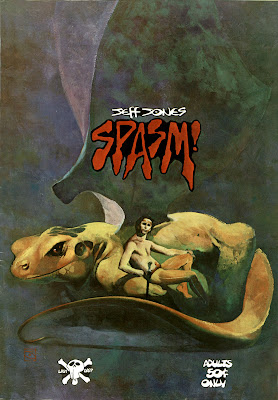 Jeff Jones was an artist whose work i really admired. He was a mainstream artist and a sci-fi illustrator but his work, too, was unlike any others. This was a collection of short, sometimes impenetrable stories with lovely illustrations. Years later, my email friend (and blog contributor) Ronn Sutton revealed that he actually posed for photo-reference for the stories in this book. More importantly, I became friends with Jones--by then Catherine--first via email and later on Facebook! She actually quoted me on her website, right next to Frank Frazetta! Last I looked, it was still up after her passing. 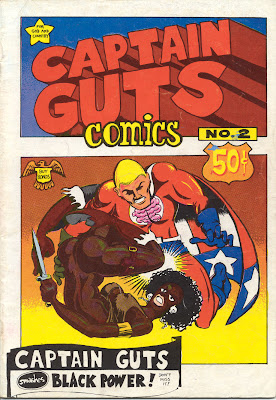 I was digging through bins of old Marvels and DC's at a local bookstore when I ran across these next two comix. Apparently the owners had no idea what they had so they were stuck right in with Spider-Man and Sugar and Spike. I thought the art was crude but the story made some satirical points that even at my age I could get. Oh, and there were sex scenes in this one! CAPTAIN GUTS creator Larry Welz would later bring out the cult book, CHERRY (nee POPTART) and would also become a Facebook friend although we've rarely spoken. Hi, Larry! 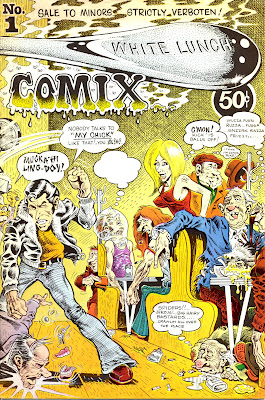 Hardly his best stuff but this one, also found along with the previous entry, featured Rand Holmes, a Wood-inspired Canadian artist whose work was at times quite amazing. 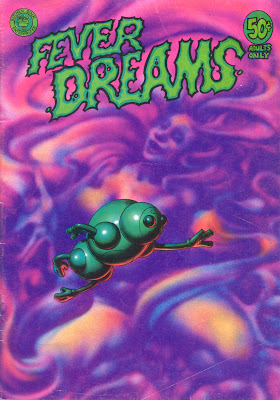 This one was more Corben only drawn rather than airbrushed. This also featured Jan Strnad who would go on to write for mainstream and independent companies alike over the years. 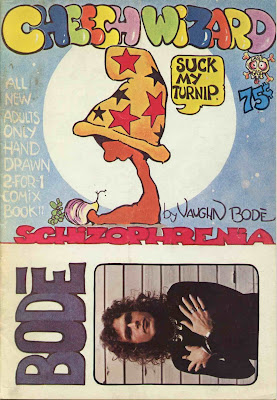 Finally, da Bode. I believe this was his last-produced book before his "death by misadventure." The top of the book featured his signature character Cheech Wizard (whom I already knew from NATIONAL LAMPOON) and the bottom featured the artist himself, by most accounts quite full of drugs and equally full of himself in those days but what I saw was a man baring his soul publicly by baring his ego publicly. He absolutely fascinated me!

Beyond that, I discovered Gilbert Shelton, Robert Crumb, Justin Green, Joel Beck, Art Spiegleman, Frank (Foolbert Sturgeon) Stack, Skip Williamson, Jay Lynch and so many, many more of this unique variant of the comic book artform. By the end of the decade, what passed for underground art had been absorbed into at least partly mainstream publications such as CASCADE and WEIRDO and the artists themselves, no matter how rebellious they may have been at one time, largely moved on.