Shame of the Jungle 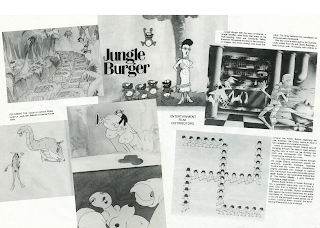 Found this double page magazine spread on the infamous SHAME OF THE JUNGLE X-rated Tarzan parody in an old issue of CONTINENTAL FILM REVIEW. The film ran into legal issues with the ERB estate and ended up barely seen in the US although it did turn up on early cable. The main points of interest in this trivia question movie are that the English language voices were provided by Bill Murray, John Belushi, Christopher Guest, the great African-American actor Adolph Caesar, THE ELECTRIC COMPANY's Judy Graubert and Johnny Weissmuller, Jr as the jungle king! The American script is credited to SNL writers Anne Beatts and Michael O'Donaghue.
Posted by Booksteve at 6:47 PM