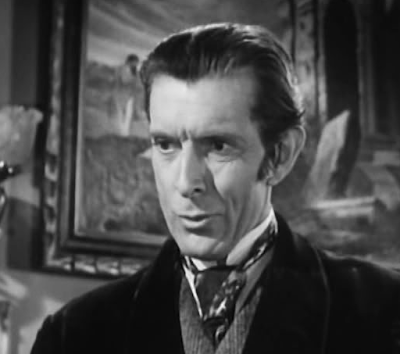 We've added some new disks at BOOKSTEVE RARITIES for the month of February with the most intriguing to me being a volume three of rare Sherlock Holmes shorts. Along with a 1955 TV appearance of Boris Karloff as Mycroft Holmes, we also get the 1949 appearance of Alan Napier, Batman's butler Alfred in 1966, as the great consulting detective. The world's greatest detective's butler as the world's greatest detective! All for seven bucks plus postage! Check out all of the great new stuff we offer through the courtesy of Martin Grams at http://oldtimeradiotapes.homestead.com/StevenSiteNew.html .
SHERLOCK HOLMES FILM SHORTS (Volume Three)
THE ELGIN HOUR (Feb. 22, 1955) with Boris Karloff playing Holmes' smarter brother.
THE STRANGE CASE OF HENNESSY (1933) with Cliff Edwards
A CASE OF HYPNOSIS (1950s) with trained monkeys in costumes
LOST IN LIMEHOUSE (1930s vaudeville humor spoofing Holmes and Watson)
LUCKY STRIKE'S "YOUR SHOW TIME" with Alan Napier as Holmes & Evelyn Ankers in cast.
Posted by Booksteve at 4:26 PM