The Warren awards were in-house awards for the Warren Publishing comics magazines which, at that time, consisted of CREEPY, EERIE and VAMPIRELLA. Let's take a look at these 36 year old awards and see whatever happened to the recipients, shall we? 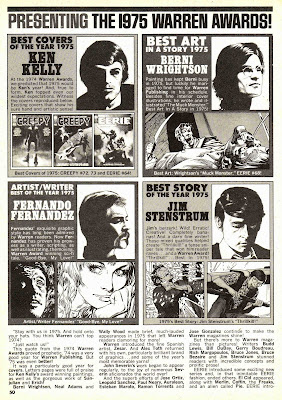 BEST COVERS: Ken Kelly--According to his website, Kelly has continued to do covers for fantasy novels as well as quite a bit of work for toy manufacturers and record album/CD covers. I don't believe I personally have run across anything new by him since the early eighties but looks like he's doing okay.
BEST ART IN A STORY: Berni(e) Wrightson--Wrightson went on to become associated with the works of Stephen King and has developed a kind of "elder statesman" horror artist status. He is also a popular and frequent convention guest.
BEST ARTIST/WRITER--Fernando Fernandez--A popular Spanish artist working at Warren, he later became associated with European adaptations of the works of Isaac Asimov. Fernandez gave up comics for painting in the early nineties and died in August of 2010.
BEST STORY OF THE YEAR: Jim Stenstrum--Assuming it's the same person, Jim Stenstrum seems to have gone into animation where he is credited with character designs on dozens of cartoon series and specials, many featuring Scooby-Doo. 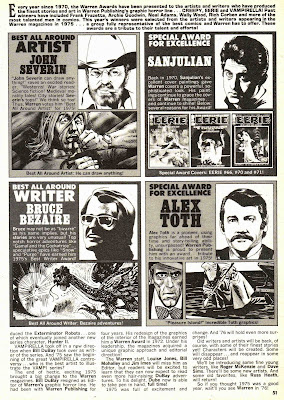 BEST ALL-AROUND ARTIST: John Severin--With Severin still working in the industry today and his newest works as good as anything he's ever done, one really can;t argue with this award.
SPECIAL AWARD FOR EXCELLENCE: Sanjulian--This classic Warren cover artist went on to do similarly good fantasy covers for many book publishers for years and maintains a solid international popularity through his presence on the Web.
BEST ALL-AROUND WRITER: Bruce Bezaire--Again, assuming it to be the same person, he seems to have gone on to do Christian-oriented comics--both writing and art--and is now considered quite successful as a Christian artist.
SPECIAL AWARD FOR EXCELLENCE: Alex Toth-- Seriously, weren't people just stopping the legendary even in his own lifetime Toth on the streets to offer him awards like this? They should have been.

Posted by Booksteve at 3:14 PM