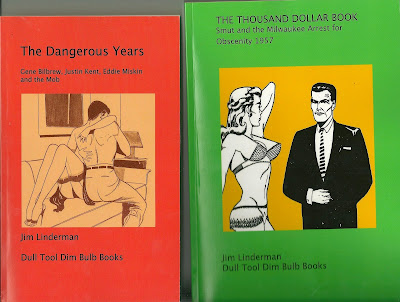 When I was a teenager running the streets of Cincinnati(and for many years afterwards), there was a place called King's News. It was literally a dirty little hole in the wall store run by a grumpy old lady from an elevated cashwrap in the center of the store. Inside was dark and dingy and the walls were lined with ancient looking novelty items and cheap city souvenirs that you just knew hadn't sold for decades. Toward the front of the store was a small candy and snack rack as well as a selection of news and general interest mags on one side and a big selection of comics on the other. The biggest in town in fact! Needless to say, that's why I started going there in spite of the otherwise permeable sense of decay. There was, however, a line halfway through the store and no one under the age of 21 was allowed to cross that line! Only once did I risk it and what I saw was a selection of PLAYBOY and similar mags but also a huge wall display of odd looking adult mags and hundreds of old looking paperbacks with sleazy covers...and yet more novelty items, this time with an adult slant. I was not impressed.
I am reminded of King's News today, however, after reading two new books kindly provided to me by author Jim Linderman. Linderman describes a long gone world where every major city seems to have had newsstands just exactly like King's News, most with mob ties.
In the 1970's, the work of artists like John Willie and Eric Stanton (sometimes ghosted or assisted by Steve Ditko) became known to comics fans for their underground bondage books and comics of the 1950's, usually published and distributed by the Mob. It wasn't until many years later, however, that authors like Gerard Jones (in MEN OF TOMORROW) researched and went on the record with the overall mob ties of the early comics and pulps as well as the magazine industry in general. Craig Yoe would take the ties even a step further when he found Superman's original artist Joe Shuster had drawn for the sleazy market in the fifties, also.
In the two books on review here, author Jim Linderman looks at a couple of books in particular. In fact, he scans and reprints the "obscene" literature in toto, with the original illustrations. THE DANGEROUS YEARS--GENE BILBREW, JUSTIN KENT, EDDIE MISHKIN AND THE MOB is the most substantial of the two books, offering a considerable amount of illustrations and background material on those involved.
Bilbrew in particular fascinates. A pioneering African-American commercial artist who is said to have worked briefly in Will Eisner's studio, he developed a heroin addiction that kept his work confined to less than stellar publishers. It is, however, subject matter aside, quite good and reminiscent of the work of Bill Ward who dabbled in both publishing worlds--comics and porn. Based on the art seen below (found on the Net and not associated with either of the books being reviewed) Bilbrew would have been right at home in comics of the day and, with his talent, might even have lasted into the Silver Age. 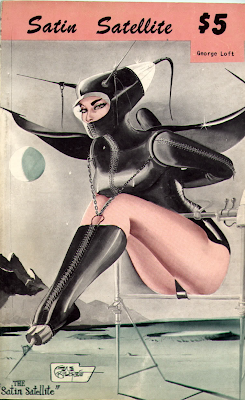 THE THOUSAND DOLLAR BOOK--SMUT AND THE MILWAUKEE ARREST, 1957 is more of the same with the concentration here being on a bookstore owner who was arrested for merely picking up copies of a book to sell in his store.
Both books also feature court transcripts and the entirety of the interesting court decisions in the accompanying obscenity cases. A highlight of each volume, though, is the original book in contention. The title book of the latter is entitled THE SEX FACTORY
while the former features THE DANGEROUS YEARS. There's also a reprint of a short story called DOUBLE-CROSSED.
That anyone looking at these books today would find them the least bit dirty is almost beyond the imagination. As Linderman himself points out, they could almost pass for Young Adult Fiction and would certainly go virtually unnoticed alongside the regular fare at a modern Barnes and Noble. The pseudonymous authors, while not great, read better than some actual bestsellers I've looked at in recent years. There's a lot of guilt and a lot of talk of cheating but there's little to none of what most customers undoubtedly expected when they plopped down their hard-earned money for the sealed copies in the dimly lit newsstands.
Linderman claims not to be a writer but he is most certainly an excellent researcher and if you're like me, that goes a long way toward making up any shortcomings as an author. For fans and collectors of fifties smut, these books are a must. For comics fans who want the big picture, they are an essential piece of the overall puzzle. For those who just want a concise snapshot of how much America and the world have changed in just over fifty years, take a look at these. Both volumes can be purchased through Jim's nifty website, VINTAGE SLEAZE. You'll also find lots more scholarly reporting on items that I guarantee no one ever would have dreamed would be reported on in a scholarly fashion!
Posted by Booksteve at 1:47 PM