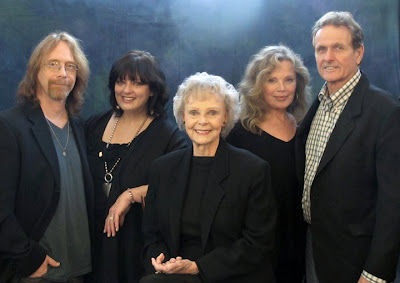 I believe that this photo was taken at last weekend's controversial celebrity autograph show. I've seen it in half a dozen places already but I hope the photographer doesn't mind my posting it yet again. It's such a great picture--the surviving cast of LOST IN SPACE reunited some 46 years after that initial episode. And they all look great. L-R, in case you can't tell, that's Bill Mumy, Angela Cartwright, June Lockhart, Marta Kristen and Mark Goddard.
People always act like if you liked LOST IN SPACE you had to hate STAR TREK and vice versa. No true. They're apples and oranges and I love them both and always have. I regret the sublimation of Guy Williams, one of the great action heroes of his generation, when the show veered toward camp comedy, but that's just it. It worked better that way. Jonathan Harris was okay as a villain in the early episodes but his later over-the-top characterization of Zachary Smith became one of THE great TV characters of all time.
One can argue that the rest of the cast became superfluous after Dr. Smith, the Robot and Will Robinson became the show's focus. Try, however, to imagine the series without them. Maybe they got the short end of the stick both as actors and as characters but in the end, as with STAR TREK, they were integral to the show's overall feel and success.
I first met Bill Mumy at a local comic shop in the early eighties. Around that same time, I spoke with June Lockhart on the phone via a radio call-in show. My wife and I met Mark Goddard at a Con in the nineties and I have typed back and forth a couple of times with Ms. Cartwright on Facebook. Never had the undoubted pleasure of meeting Ms. Kristen. Like the STAR TREK folks, however, they are all professional and all personable. At the end of the day, they are also all an integral part of what makes me "me." So nice to see my old friends all together again.
Posted by Booksteve at 11:22 AM